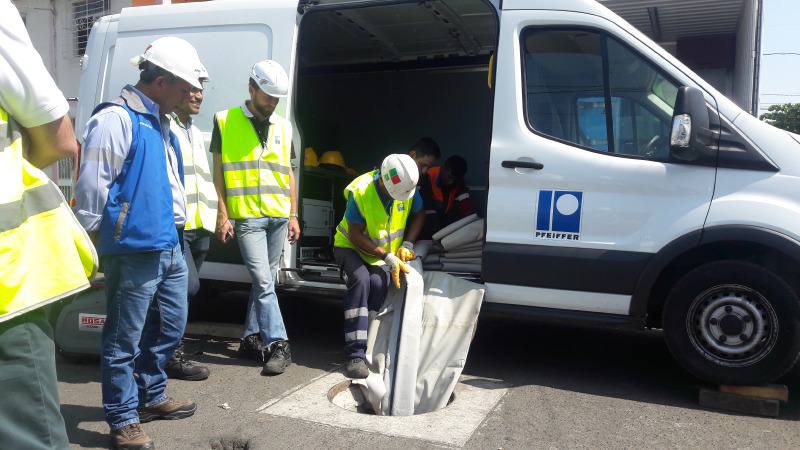 A long sleeve of polyester was unrolled and entered from a van into a sewer pipe. The goal was to go from one corner to another, on 16th Street and first Francisco Segura alley, west suburb.

Yesterday morning personnel of the German contractor Ludwig Pfeiffer continued with the tasks of rehabilitation of the networks of the system of sewage system. This technology works without breaking the road or sidewalks.

The project, started in January, was visited yesterday by Mayor Jaime Nebot when two kilometers of rehabilitated collectors were completed.

This process is done with high-tech robotic equipment that diagnoses the condition of the pipes, explained José Luis Santos, manager of Emapag. Then a sleeve of polyester fiber impregnated with resin is introduced, which is inflated and subjected to a process of curing with steam to correct structural defects and replacing the old pipe.

Fernando Valderrama, inspector of the work, said that the project of rehabilitation of sanitary sewer will intervene a total of 80 kilometers of networks, distributed with 42 km of collectors and 48 km of branches and straps. “It is a pipe that guarantees that there will be no infiltration of sewage and that guarantees the power and resistance. This project will benefit 325,000 people, “said Nebot.

The work is expected to be completed by May 2019 at a cost of $ 25 million, the mayor added during his inspection tour. In parallel, the concessionaire Interagua fulfills the final tasks of substitution of drinking water home networks in other roads of the suburb, as in the 31st and East. The work, which costs $ 1.5 million, will benefit 5,000 people. (I)