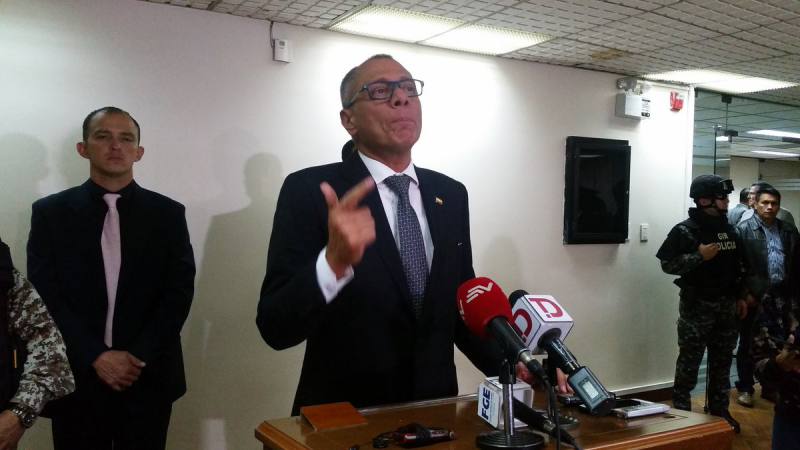 Carlos Baca, prosecutor requested this morning the maximum penalty for the crime of illicit association, for the vice president without functions Jorge Glas, as the perpetrator of the crime.

Baca made the request to present the final arguments in the trial that follows since November 24 in the National Court of Justice against Glas and eight other people prosecuted, including his uncle Ricardo Rivera, and urged the judge to issue sentence.

The prosecutor began his presentation explaining the crime of illicit association through international criminal assistance, testimonies and financial analysis expertise, which shows the amounts of transfers for $ 33.5 million. Both parties, accuser and defense, arrived this morning at the National Court of Justice whose trial hearing today reaches its 13th.

This same Thursday, the State Attorney, Diego Garcia, warned about the defenselessness in which the Ecuadorian state remains, once the judges excluded the representative of the Prosecutors Office, due to the delay of his representative on day 11 of the audience.

Baca presented the closing arguments in the trial hearing, which are the legal arguments and conclusions reached by the Office of the Prosecutor after presenting its evidence, accusing each defendant and asking the judge to issue the sentence. The Office of the Prosecutor indicated that Glas’s participation in the criminal structure has been demonstrated with the testimonies of the former legal secretary of the Presidency Alexis Mera; of the ex-employees Rafael Poveda, Marco Calvopiña and Eduardo Barredo; of his uncle and José Santos, former director of Odebrecht in Ecuador.

The prosecutor explained that Glas in the exercise of his functions maintained control of different strategic areas: hydrocarbons, hydroelectric, irrigation and telecommunications. Along with the power and interference exercised by Glas, Baca also said that the relationship was proved beyond the familiar relationship he had with Rivera, whom he pointed out acted as his intermediary, and it was demonstrated that the works in which this scheme was produced of bribes belonged to the strategic sectors.

Julio Sarango, a lawyer for César Montúfar, Glas’s private prosecutor, asked the defendant for the maximum penalty and added that as a full reparation he demanded that the president pay half of what Rivera received from Odebrecht ($ 14.1 million), that is, , $ 7’050,000.

In the case of Rivera, Baca indicated that the presence of archives referring to the vice-presidency on his computers has been proven. And that the testimony of Santos presents him as an intermediary of Glas in the delivery of money from contracts.

The Court suspended the hearing yesterday, and today it resumed to begin the debate that will be based on 4 parameters: existence of the infraction, responsibility of the person in the event, the applicable penalty and integral responsibility.

The judge Edgar Flores said yesterday that this Thursday, at any time, end the stage of final arguments and, once concluded, the Court would enter to analyze the resolution it will take in the case of unlawful association.

The Prosecutor General’s Office, which refrained from accusing Odebrecht’s denouncer and former director of Ecuador, José Conceição Santos, of the same charge, has warned for weeks that Glas and others involved could be accused of more crimes such as bribery and illicit enrichment, with much more severe penalties. (I)