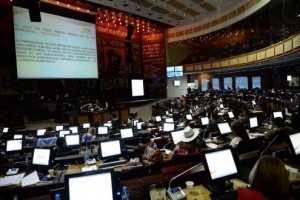 Mauricio Proaño, of Alianza PAÍS (AP) movement and Vice President of the Commission on  Food Sovereignty, presented in the plenary a new proposal to the articles that define the Single Water Authority, its competences and its powers. This, according to which the State has exclusivity in the rectory of water as strategic resource.

Proaño established 18 powers of the Unique Water Authority, including: exercising the steering role of public policies relating to integral and integrated management of water resources, coordinate with national environmental and sanitary authority policymaking on water quality and pollution control.

One point Proaño calls to change is Article 221 of the project, with this, e seeks the Authority is defined as the entity that directs the strategic national water system, whose holder will have the charge of Minister and will be appointed by the President of the Republic.

With this approach, the AP discarded that the Plurinational and Intercultural Water Council has a bearing on the decisions of the governing entity as demanded by some sectors of towns and nationalities in the process of pre-legislative consultation. Lourdes Tibán (PK) insisted that the consultation should be binding.

Malaysia Airlines’s disappeared plane will be search in new area

Government will reduce contributions to the municipalities