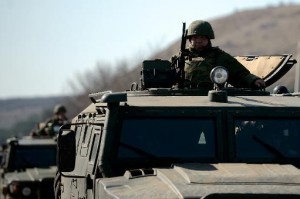 The American Secretary of State, John Kerry, has come this Friday morning to London to meet his Russian counterpart, Serguei Lavrov, in order to treat the conflict in Crimea. This Sunday, March 16, the ukrainian Legion, which is mostly inhabited by Russians, will held a referendum on its annexation to Russia, described by the international community as “illegal”.

Before the meet of the heads of the Russian and the US diplomacies Russian, a spokesman for the Russian Navy reported that fighter jets and helicopters of that body have begun military exercises in the Mediterranean.

This manoeuvres begin a day after Russia announced military exercises on the border with Ukraine, involving 10,000 soldiers. In addition, the President of Belarus confirmed the arrival of nine Russian war planes on his territory.

Last Wednesday, US., Bulgarians and Romanians ships conducted joint naval exercises in the Black Sea, where the crimean peninsula is extensed.

On the other hand, journalists from the Reuters agency saw this Friday in Crimea the landing of soldiers and armored vehicles carried by a vessel from the Russian Navy.