Samper gets ready to take the Presidency of UNASUR 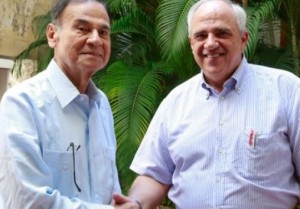 The Secretary General of the Union of South American Nations (UNASUR) Ali Rodriguez Araque, met last Wednesday in Cartagena, Colombia, with Ernesto Samper, who will assume the presidency of UNASUR on August, 22 in Montevideo, Uruguay.

During the meeting, the two talked about regional integration policies promoted by the agency and the challenges that Samper will face once he takes office.

“This is a preliminary meeting in which he gets aware (Samper) of Unasur’s affairs, policies that have been developed, the institutional development of the organization, what we could call the office and responsabilities transfer” said Rodríguez Araque in statements to Venezolana de Television.

Likewiswe, he said that during his management he will be engaged to comply with the Declaration of Montevideo that will emerge after the next Unasur summit to be held on August, in Uruguay.