Santos: Alvaro Uribe tried to initiate a peace process with the FARC in Brazil 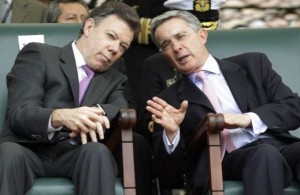 Colombian President Juan Manuel Santos said yesterday, Monday, that the former President Alvaro Uribe tried to reach a peace process with the Revolutionary Armed Forces of Colombia (FARC), between 2006 and 2007 in Brazil.

Santos mentioned that the previous government not only tried to start a process, but it made “many attempts to make a peace process,” similar to what is currently being developed between the government and the FARC in Havana.

The President also criticized the “double standard” that in his opinion has today the opposition, led by Uribe, of accusing the current government of “surrending the country to the “castrochavismo.”

Given the revelations, a member of the negotiating team of the FARC, alias `Pablo Catatumbo´, said that Uribe tried to make a rapprochement with the guerrillas between October and November 2006, and proposed a meeting in Brazil.

The attempts of Uribe to seek negotiations with the guerrillas during his administration (2002-2010), were revealed by columnist Daniel Coronell, in the latest edition of Revista Semana (Week Magazine).