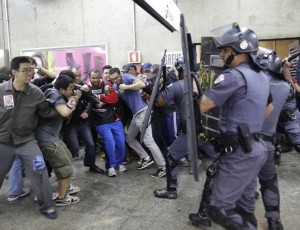 The police in Sao Paulo dispersed protesters supporting the subway strike in Brazil this Monday with tear gas in another day of chaotic traffic, barely lacking three days of that this city received the inauguration World Cup.

Around 25 police fired tear gas and sound bombs against a group of some 150 protesters who set fire to piles of garbage to block traffic on a central avenue near the Ana Rosa metro station.

Despite these actions, the protesters regrouped, others joined, and about 300 marched to the secretariat Security of Sao Paulo chanting, “There will be no Cup will strike”.

Protesters thus showed their support for the strike of employees of the metro at its fifth day, which poses a threat to the good development of the World Cup in this city of 20 million people where on Thursday Brazil and Croatia will play the first game of the Cup.