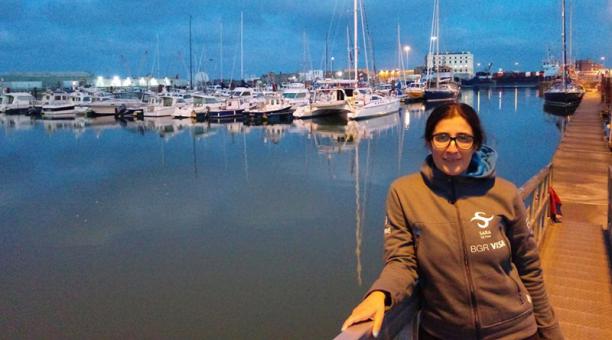 ‘It was difficult to swim against the tide, the currents were very strong, but I had an incredible experience. I am happy, satisfied after fulfilling the challenge for which I trained for a year, “she recounted from Dover, in England, Sara Palacios or Sara de Mar, as she named her Facebook page.

On Thursday, July 12, she completed the 33 kilometers of the English Channel to become the first Ecuadorian to achieve this feat, and the tenth in Latin America. Still exhausted by the effort of 12 hours and 58 minutes of swimming, she took time to recount her achievement, which she enjoyed together with her husband Diego and her parents, Santiago and Sandra. “They became the soul mover. They accompanied me from the boat that guided me from England to France. Their words and messages pushed me when exhaustion affected “.

On Wednesday, July 11, at 11pm from England (6pm in Ecuador) the crossing began. “I swam five hours in the dark, it was difficult, but the water was at a moderate temperature (16 degrees Celsius). It got complicated in the morning because the sun never came out. The temperature went down. Fortunately I had trained in Quito and in the Pacific, on the coast of Lima (Peru) so the body got used to the cold quickly.”

But her greatest effort had to be exhibited in the final three hours of the voyage. “After 9 hours of swimming and swimming, I finally looked at the coast, but that stretch was endless. I found a strong tide that was pulling me out. I fought for three hours against the current to reach the beach of Calais (France). ”

She  had no problems with dizziness or vomiting, and at no time did she have any compulsion to think about abandoning her feat. “From the Viking (the guide ship), on a slate of liquid ink, he wrote me words of encouragement. ‘Value’, ‘calm’, ‘little missing’. With a megaphone, which we brought from Quito, my husband told me, “you trained for this moment, give it everything”.

She said she felt great motivation to see them there, on the edge of the boat, watching and encouraging her. 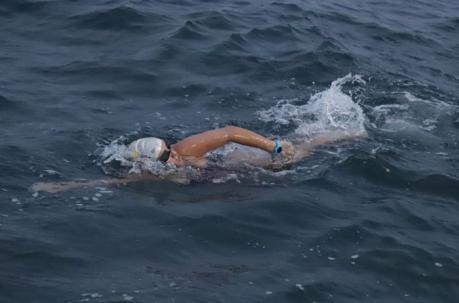 The final minutes of the trip told them with great joy, she let out several laughter and also her voice faltered because the emotion drowned her. “After 12 hours and 58 minutes that the body is suspended in the water, getting to the beach gives you a sense of relief, but when I tried to stand up and run away I could not do it because of the dizziness, I stumbled. It was fun to try to maintain composure, because the judge’s chronometer only stops when you’re out of the sea, completely. ” She had achieved it.

“The Viking accompanied me up to 300 meters from the beach, Diego and my parents stayed there. I, after arriving at the beach and having the qualification of the judge, went on a boat to meet them. We gave each other a big hug where the crying was not lacking. There were many feelings together.”

Sara Palacios, 32, will undertake tomorrow (July 14, 2018) the return to Quito to embrace her daughter Manuela, “and to confirm my next journey.” Crossing the English Channel is part of her Siete Mares project.

The first step has already risen, the next could be Santa Catalina in the United States or the Rock of Gibraltar, between Spain and Morocco. “The English Channel behaved very well with me, I was afraid of throwing myself into an unknown sea. It is a sea of respect. I will always carry it in my heart. ”

She swam at an average of 48 strokes per minute. “At the beginning I was swimming very fast, I slowed down in the final part, but the average was 3 kilometers per hour.” (I)

Incident between Correa and Cueva will go to the courts