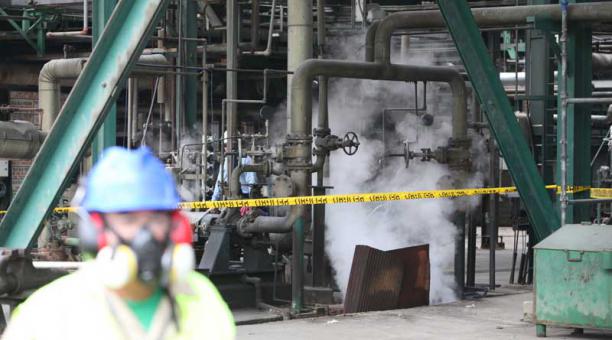 The Esmeraldas Refinery, which was upgraded during the previous government, will be intervened again. Petroecuador will make an integral maintenance in this industrial plant that will take around three years.

In this period, programmed stoppages will be carried out to intervene different parts of the refining plant. The purpose is to improve the operating conditions of this industrial complex that has 14 processing units. The decision to execute this plan was taken, after the “failed” repowering that took nine years since it was planned, Petroecuador informed, via mail.

Executing an integral maintenance, two years after a repowering, show that the USD 2,200 million invested by the previous Regime was “badly” used, said Edmundo Brown, former vice president of Petroindustrial. “A strike is not a normal maintenance activity, it is something transcendent, all fronts are covered,” he said.

The new maintenance will be carried out in a phased manner, according to the availability of the spare parts, the required services and costs of the derivatives, said the manager of the state, Carlos Tejada. The first unit to be worked on will be the Diesel Hydrosulfurizer (HDS), which is responsible for removing sulfur from diesel. This intervention is planned for this March 25 and will last about 15 days.

During this shutdown, the HDS Unit will maintain the hydrogen compressor, repair the heavy naphtha heating furnace and fix the heat exchangers, the company said.

For these works, which will be in charge of the personnel of the same refinery, some USD 400 000 will be allocated, between spare parts and internal labor. The total cost of this maintenance plan will be determined when the arrangements are completed. Once this maintenance is completed, the HDS unit will operate at its maximum design capacity, that is, it will deliver 24,500 barrels of premium diesel per day.

The authorities hope that, after the intervention, the fuel will have a better quality. The goal is to commercialize diesel with 80 particles per million sulfur (ppm). The Refinery currently delivers a diesel with 100 ppm, although the values are below the maximum range (500 ppm) of the INEN standard.

A better quality diesel will reduce the emissions of polluting gases to the environment and will make the engines of the cars that use this derivative work more efficiently. In May 2018, the interventions are scheduled to be concentrated in the Fractionation of Catalytic Cracking Unit (FCC), considered the heart of the Refinery. This unit converts crude into derivatives such as domestic gas, high-octane gasoline (super) and fuel oil 6 (cutter stock).

Due to the characteristics of this infrastructure, scheduled maintenance will be longer and will take 54 days, informed Carlos Pérez, Minister of Hydrocarbons, at the end of February 2018. Currently, the FCC operates with preventive measures. Until their maintenance is completed, operators steam-cool the hot spots of this regenerator to reduce the high temperatures.

To solve these problems, the state has planned to intervene in the number one train that includes the FCC Unit, furnaces, the installation of a new electric generator and others. The rest of the interventions that the Refinery requires will be done later.

Petroecuador did not specify details in this regard, but pointed out that these planned maintenance does not mean total stoppages of the complex or gas or gas shortages. During these planned stoppages, derivatives will be refined, as the case may be, in other units that will not be intervened. It is also planned to import these products to meet domestic demand, although the exact data have not been specified. This will imply additional investments by the State to buy derivatives and repair, again, the refinery, warned René Ortiz, former general secretary of OPEC.

Just to supply the domestic demand of the automotive sector, in this 2018 2 billion gallons of fuel will be required. The state budget for this year destined to the purchase of fuels (gasoline, diesel and gas) is USD 3 107 million.

After the repowering of the Esmeraldas Refinery, which ended at the end of 2015, at least six problems were identified in August of last year. Among them, the overheating of the FCC Unit, considered the heart of this complex. (I)