BREAKING NEWS
National Electoral Council endorses Álvaro Noboa as candidate, despite litigation by his political party
Galapagos, the desecration of the marine sanctuary
Adelante Ecuatoriano Adelante Convention chooses Álvaro Noboa as its presidential candidate
Former President Abdalá Bucaram Ortiz, arrested in a strong police operation in Guayaquil
Israeli Shy Dahan was assassinated in Prison while implicated in the sales of medical supplies to Jacobo Bucaram
Organizations warn about threat to Xavier Bonilla, cartoonist for the newspaper EL UNIVERSO
CNE denied challenges from three canceled political organizations
Adelante Ecuatoriano Adelante faces third cancellation resolution in the Electoral Council
Lasso is trending on Twitter: ‘The one that appears in a video that circulates is me’
Tax law benefits are already applicable for bananas and other sectors

Schwarzenegger Back in Russia 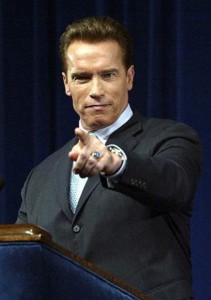 Governor of California, Arnold Schwarzenegger used the personality of the famous Terminator with his phrase “I’ll be back” before the Russian President Dmitri Medvédev. The versatile Governor, who played the Terminator in 1984, ensured that the phrase he used during his visit in Gorki to promote the project of a Russian center of technology and innovation in Skolkovo was done so that he automatically is associated with the legendary cyborg.

Schwarzenegger stated that on Medvédev visit to California, he said, “In California I told you ’I’ll be back’ and here I am.”

On June 23, the actor and politician met for the first time with Medvédev in California’s Silicon Valley, a place known for its technological revolution. It seems Schwarzenegger misses his acting days since he uses some of the Terminator phrases on political commitments.

The “Governator” as he is popularly known in EE.UU confirmed that he plans to go back to his acting career when his term finishes next January. The last cameo he made on the big screen was in “The Expendables”, a movie directed by his friend Sylvester Stallone. (AV)