Although the Galapagos Islands are already a world icon of nature, gathering information about their biodiversity and continuing to discover species has become a challenge for researchers. 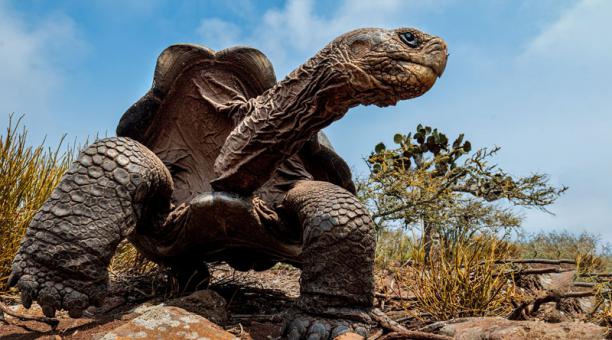 With this objective, a group of scientists undertook a project that resulted in the publication of the first reptile book in the archipelago. This guide, which was presented at the end of October 2019, gathers the information of the 58 species of reptiles that inhabit the islands.

This work also includes the discovery of two new species of geckos or salamanquesas, which were found in two of Isabela’s volcanoes. Juan Manuel Guayasamín, one of the authors of the book and research professor at the Galapagos Science Center of the San Francisco University of Quito, explains that this project seeks to give reptiles in the archipelago the importance they deserve.

In addition, it marks a path of what should be done with all the animal groups of the islands. The idea of ​​this book came from a larger project that tries to bring together all the species in the country and is led by Alejandro Arteaga, researcher and founder of Tropical Herping.

When working on this, they realized that the diversity of reptiles in Galapagos was so high and that, although there is information, there is much work to be done. Arteaga says that it took more than two years of fieldwork and was supported by more than 22 organizations.

Guayasamín says that the idea is to bring people closer to the biodiversity of the place. In general, Galapagos reptiles are only associated with turtles or iguanas, but there are species of snakes, lizards and geckos that also inhabit the area and it is necessary to know about their existence to promote their protection. Although Galapagos is considered an example of conservation, these animals must still face various threats.

For the researchers, the results show that the introduced species remain the main problem. In the case of Isabela’s pink iguana, for example, there are few hundred copies. The risk for these reptiles increases due to the presence of invaders such as rats and pigs, which feed on their eggs or harm them.

The newly discovered salamanquesas are others that already face this threat. Dogs and cats introduced to the islands are also a problem. Guayasamin says that in some cases there is no control over pets. These reproduce, their young are abandoned in the public space and, in some cases, become feral.