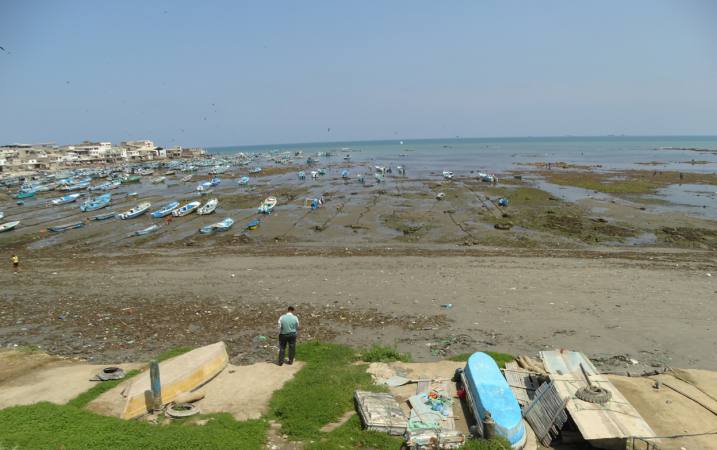 The fishermen preferred for the second consecutive day tomaintain their boats and avoid going into the sea, pointing out that there were strong winds that could put their integrity at risk. This is because beforenoon yesterday the sea receded again in an unusual way, due to a very low tide because of the tides of syzygy, according to the Oceanographic Institute of the Navy (Inocar).

Syzygy occurs when the Moon and the Sun are in conjunction;where the retreat of the sea is an effect of the attraction of the Moon overthe sea, explained Edwin Pinto, director of Oceanografía del Inocar. In Santa Elena, specifically in the port of Santa Rosa (Salinas), dozens of boats were on a sandy plain, amid algae, plastic remains, trasmallos and garbage.

The sea moved away about 120 meters. “It reminded me of about 5 years ago when they said that we were going to have a tsunami,” said Gustavo Quijije, recalling the earthquake and subsequent tsunami that struck Japan in 2011. “(On Wednesday) there was fear in Santa Rosa, the sea retreated about 200 meters, all the boats were dry”, said the fisherman Javier Benítez, who said that on that day several fibers returned to land because supposedly the conditions for sailing did not They were the most favorable. “There were waves of one and a half meters and two meters, the wind blew strong and there were boats that had to return to the port,” he said.

The fishermen maintained that they could not pass the 10 miles after the edge of Salinas, because of the risks that the wind represented. “It was very strong and it is surprising because this is not a time of winds, nor is it watering time, it is assumed that there was normal tide,” said Xavier Orrala, captain of a fishing vessel.

The low tide was also used “to shellfish”, as the fishermen call work such as extracting churos from the rocks. The natives who offer freight regretted not being able to provide services. “You make about $ 15,” said Felix Limones, boat owner.

In the tourist beach of San Lorenzo, in Salinas, the plain recalled the blanket of sand that the spa had for more than 20 years.

In El Oro, the retreat of the sea hindered the tasks of artisanal fishermen and industrial activities. The ECU-911 system indicated that there were no material damages or injuries. On the beaches of Jambelí, Bajo Alto, Jambelí archipelago and in the Hualtaco, Puerto Jelí, Puerto Bolívar ports, the sea receded a few hundred meters for a few hours. “It is a phenomenon that left a large sandbank clear, even the bases of the breakwater wall that was placed in front of Jambelí beach were observed,” said Geomer García, tourism promoter of this commune of the archipelago of the same name.

The level of the water off the coast of Manta was reduced past 10:00 yesterday. The fisherman Eladio Mero said that at this time it is a normal situation. “It has not been seen like in other beaches that practically the water went away several meters, here as you see the level of the water was reduced, allowed to see some rocks, but it did not happen to majors”, expressed of the event that attracted the interest of inhabitants Around 12:00, the level returned to normal. (I)