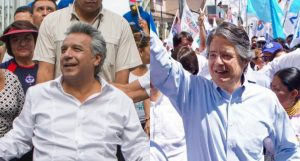 Lenin Moreno (Alianza PAIS) and Guillermo Lasso (CREO) will go to the second round for the presidency of Ecuador.

The National Electoral Council (CNE) announced Wednesday, February 22, through a national address, that there will be a runoff between the candidates Lenin Moreno, who represents the Alianza PAIS party, and Guillermo Lasso of the CREO movement.

Its president, Juan Pablo Pozo, confirmed that citizens would be called back to the polls on April 2 of this year.

Following the elections held on Sunday, February 19, a series of protests and demonstrations have taken place in the cities of Guayaquil and Quito, specifically in the exteriors of the CNE offices.

These manifestations had as purpose, to demand agility and transparency in the counting process.

Pozo had announced last Monday that the results would be delayed for three days, which generated some reactions from the opposition sectors.

Following the announcement of the second round of voting, the CNE reflected on its website 99.45% of polled voted that gave Lenin Moreno a 39.35% of votes while Lasso obtained a 28.11% of votes.