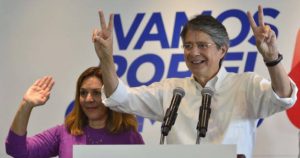 At a press conference held on Thursday, Guillermo Lasso, a presidential hopeful of the CREO party, said he is not afraid of the “crossed death,” a mechanism that President Rafael Correa referred to on Wednesday before international media.

“In a year they will be asking for early elections, which is allowed by the Constitution and with the crossed death I will have to run for elections once more and defeat them again,” Correa warned in case Lasso becomes president.

Crosses death is a mechanism that empowers the president to close the National Assembly, convene new elections and govern with his decrees for a certain time, “therefore it is a constitutional precept, there is nothing to fear,” said Lasso when consulted about it.

Moreover, he announced that he would call a referendum to ask about indefinite reelection, in response to the possibility raised by President Correa to run for elections in case of a crossed death.

He added that “today the people do not overwhelmingly agree with indefinite reelection, Rafael Correa´s desire of returning to the government are only dreams.”

Meanwhile, at the beginning of the campaign for the second round, the leader of CREO reported that he would provide documentation to the Oversight Commission of the Organization of American States (OAS) on alleged irregularities in the first round process.