Second hearing against Leopoldo López was suspended for August 13 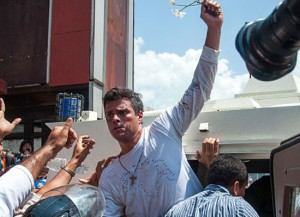 The second hearing against the opposition leader Leopoldo Lopez and four students who were arrested during February protests, was suspended for August 13.

Juan Carlos Gutierrez, a member of the defending team leader Will Popular (VP), mentioned at outside the court that “it will produce a deferral of act planned for today, the continuation of the trial against Leopoldo López and students for the 13th of this month. ”

Meanwhile, Lopez’s wife, Lilian Tintori urged the judge who was in charge of this hearing, Susana Barreiros, allow the defense to set the evidence needed “to prove the innocence of Leopoldo”.

Lopez is imprisoned since February 18 on charges of public incitement and property damage for the violent events of last February 12 in Caracas, which marked the beginning of anti-government protests recorded until last May.