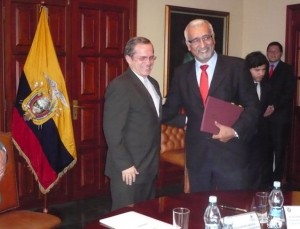 The governments of Ecuador and the Sahrawi Arab Democratic Republic discussed the possibility of opening embassies in each country, in order to strengthen their relationships.

This was announced by the Ecuadorian Chancellery after the meeting held yesterday in Quito by Ecuador’s Foreign Minister Ricardo Patiño and  Hach Ahmed Baricalla, Minister for Latin America of the Saharawi  Republic.

The two met at the headquarters of the Ecuadorian Ministry of Foreign Affairs, to discuss bilateral relations, the opening of embassies in the two countries, politics issues and cooperation, said the Chancellery in a statement.

During the meeting, Patiño highlighted international integration policy promoted by the Ecuadorian government and the importance that Quito assigns to the called “South-South relations.”

23 victims from MH17 flight have been identified by forensics