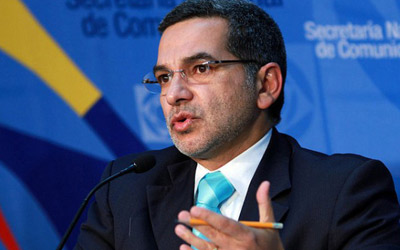 During a discussion organized by Columbia University that was held yesterday in New York, Fernando Alvarado, Secretary of communication (Secom for its spanish acronym), defended regulations imposed to the media and journalists in the Act of communication, as well as the independence of the regulation Council.

The meeting brought together the Rapporteur for Freedom of Expression, Catalina Botero, Carlos Lauria of the Committee to Protect Journalists (CPJ), students and professors.

Lauria said that in his view the Communications Law in the “antithesis” of the Inter-American Human Rights System as it includes topics such as media lynching and the ban on publishing issues considered reserved.

He also questioned Alvarado on the autonomy of Carlos Ochoa as Superintendent of information, referring to Ochoa when he was a Government media interviewer made strong criticism of opponents and the press.

Alvarado responded that “we should give the benefit of the doubt… Carlos Ochoa dislike everyone, but he is the chosen.”

“Who defines what is the public information interest (category as required by law)? This Superintendent who is elected from a triad of President of the Republic ? To me that sounds far from international standards, with all due respect”, said Botero.