Two assembly members from Alianza País to the Ethics Commission 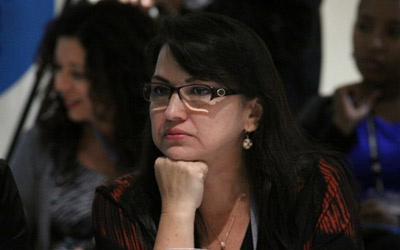 Paola Pabón and Gina Godoy, both assembly members belonging to the ruling party, were called to the Ethics Commission from AP to explain their stance on the New Criminal Code during the second debate on the decriminalization of abortion for rape.

Pabon, who introduced the motion to vote separately on the abortion for rape article, said that the Chairman of the Ethics Committee, Carlos Marx Carrasco, called her for this Friday at 16:00, after the national Polit buro met and the insistence of President Rafael Correa to apply sanctions for “certain assembly ” in whom he has lost confidence.

Galo Borja, one of the members of the Committee, said that processing will be based on the code of ethics of AP and the agreement signed by the Assembly before being candidate, wich established some decisions to be make collectively and in unity. The sanctions, according to the organic system , could be a written or verbal reprimand, or suspension of rights activist for up to 6 months (minor offenses) or suspension of rights from six months to two years or final separation of the movement, for serious misconduct.

Pabon said he will not resign, and asked to assess the work done in five years of work, and said the best example of “organicity” was the withdrawal of his motion to request the AP bureau. Godoy would not comment because he said he respects the internal nature of the disciplinary procedure.

However, in the plenary, other 19 officials spoke out in favour of the subject: seven men and twelve women, regardless of the the President of the Commission of Justice and Mauro Andino, Mariangel Muñoz, who signed the report for first debate in which already decriminalizing abortion for rape, and the statements of other Assembly members as Rosana Alvarado.

Electric cars arrive to the country

Council of Higher Education intervene the University of Guayaquil