Seeking where to attach 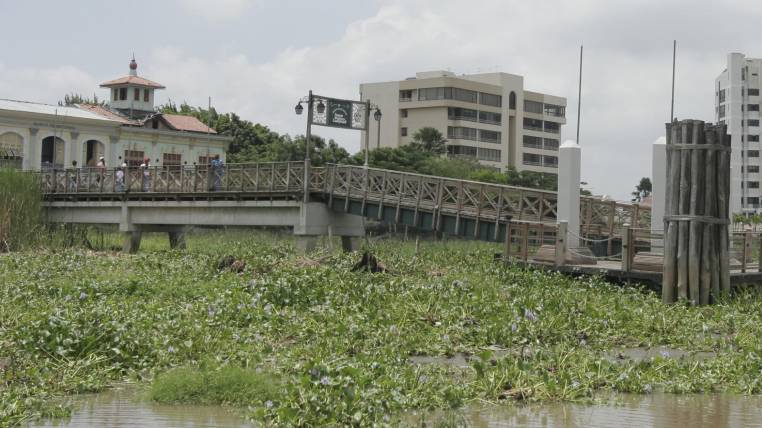 The most friendly dock of the estuary that connects with Guayaquil is in the Historical Park. It is free for citizenship and is open to the public from Wednesday to Sunday. You can approach, on the inner side of that recreation center, walk there and look at the tributary. And that’s it, because the pier is no longer a dock, it’s just a viewpoint, an adornment of hundreds of thousands of dollars.

It was assumed that in 2015 the first tourism route in the Gulf would operate there and that from that point Santay Island could be reached. The final investment in that work amounted to $ 900,000. Today is smoke. Although of course, Real says that although for the moment it is not contemplated to use the pier as a pier, “the possibility is not ruled out”. And it is all the explanation that it offers. But it is not the only inactive dock.

In Durán there are three. All in bad state, with rotten wood, rusted handrails and in total abandonment. And Guayaquil is not far behind. In October 2016, Mayor Jaime Nebot inaugurated the first sports and tourism marina. It is a dream for sailors of small boats in Puerto Santa Ana. Built in an area of 1,219.85 square meters, it has protection handrails in the area, with entrance ramp, distribution hall, platform and floating dock, hygienic services, covered cafeteria, accessible terraces and stairs of vertical circulation and lighthouse.

But it is inactive. The spokesman of that entity, Jorge Rodríguez, in a recent interview with EXPRESO, explained that the work is still waiting for its concession. “It’s being tendered, because that’s what the law requires.” On the boardwalk (malecon) it is different. There the springs, of which only three remain after the regeneration, when there were more than six, have fixed operators. “A concession issue is handled. They work most from Monday to Sunday, “except for the Yatch Club, which is managed by the Navy, explains María Luisa Barrios, spokesperson for the Malecón 2000 Foundation.

Of the latter, four operators were withdrawn in 2015, after five years of working there. One of these is Aventuras Ecuador. Its owner, Milton Abad, has abandoned his two tourist boats. “And all for lack of springs.” “I know that one of the operators is currently in the Caraguay, and that the other two have their boats inactive,” he says.

In this regard, this Journal sought the National Directorate of Aquatic Spaces, which directed the interview request to the Harbor Master’s Office. There, captains Gabriel Ordóñez and Rafael Roche explained that, by a special request, and after the collapse of the swing bridge, it is allowed to operate on the dock of the Yacht Club to two boats on Santay Island.

But, they added, because of safety issues, and because the dock is a state dock, it cannot be used for usufruct of any kind. They also stated that if this was done before, it was out of the legal.

The annoyance of not being able to use the docks extends to particular cases, such as the cultural manager Ramón Sonnenholzner, who owns a boat and has tried to park in the inactive pier of Santa Ana port. “Neither paying nor paying can be reached. It’s a problem, and a pity. Guayaquil lacks a port for boats and canoes. ”

Captain Pablo Calderón, from the Captaincy of the Port, agrees. “The solution is a municipal dock, and at this moment there is not one that is not concessioned. There are people who have approached the Captaincy to ask the requirements to offer water taxi service, but the great limitation is the springs. They exist, but they cannot be used to leave or receive passengers, “he explains.

But Barrios, the spokeswoman of the boardwalk, contradicts this position and ensures that “any tourism operator and / or private vessel that requires and wishes to use the docks, can do so by formally requesting the Malecon 2000 Foundation”.

In the specific case of tour operators, says the official, they can make use of these once they present all the corresponding permits and papers in order, as well as all the security and communication implements necessary for the operation.

But that on the boardwalk, what about the others? The expert in urban planning and creator of the Delta project, Héctor Hugo, suggests, in the short term, to reactivate the disabled docks. “They have to involve not only the municipalities, but also the Ministry of Transport and Public Works and the Navy. “The administration of the docks deserves to implement a management model, with an interministerial commission, where the entities and protagonists involved, such as tourism promoters, will be integrated.

Open docks to boost tourism or private mobilization is something that can be done now.

“A work can recover the history of the boardwalk In his thesis for obtaining the master’s degree in Urban and Regional Planning of the University of Buenos Aires, his second postgraduate degree, urban planner Luis Saltos recalls that even before the urban regeneration of the Simón Bolívar boardwalk worked docks that provided specific services of fluvial transport: recreation (Pedregal), services (Firemen), among others, but they were reduced with the new pier.

The expert regrets that the history and fluvial tradition are not taken into account and several activities are maintained. It is a mistake, he believes, the tendency to privatize public space.

For now, the boardwalk hopes that the construction of three new docks will be completed, which will serve to “re-incentivize the use of the river and receive large international sailing ships,” Mayor Jaime Nebot announced in July. Astinave, company of the Ecuadorian Navy, will be responsible for the construction.

The first will go from where the Guayas school ship stationed to where the Morgan is installed, at the height of the Yacht Club. The location of the other two was still to be defined when the work was announced. (I)