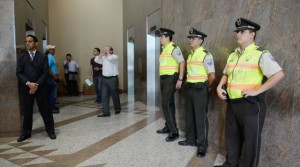 The company Seguros Bolívar went into a forced liquidation due to financial problems, as stated by the Superintendent of Banks Pedro Solines.

“On Friday afternoon I signed the resolution and I understand that this morning it was entered in the Commercial Register so it is already effective,” said Solines.

The Superintendent of Banks explained that in May updated reports were requested on how the regularization plan and the compliance with the Banking Board was going and then it was found it had debts of $ 7.7 million.

The report also showed that the company had to pay the workers, had obligations to customers for losses not covered or not paid, has debts with suppliers and state agencies (IRS, Ecuadorian Institute of Social Security and bank superintendents and Companies).

Correa denies that closure of Hoy Daily be for Communication Law

Monetary Code Draft would endorse transactions only in dollars