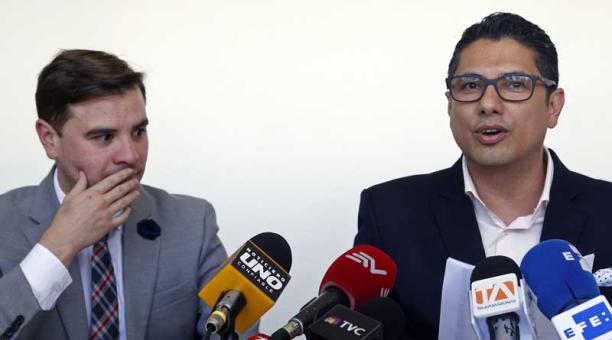 The Intelligence Secretariat (Senain) has set up two special operations to follow in the footsteps of Fernando Balda, in Colombia. The first was executed by three intelligence agents, on May 10, 2012.

That day, in Medellín, Balda met in a forum with the former Colombian president, Álvaro Uribe. The three intelligence police, including Raúl Chicaiza, the main suspect in the kidnapping of the politician, infiltrated the event to learn details of the act.

On the same day and in the same place, another group of three agents was working on Counterintelligence. Their mission was to monitor and obtain information on the topics they would discuss at the meeting, the resolutions they would adopt, who the actors were and the participants.

That is, the Counterintelligence group not only monitored Balda’s actions, but also those of the intelligence agents, since they were part of the event. That detail is in the investigation that the Prosecutor’s Office conducted in the Balda case, and that this Wednesday, July 18, 2018, closes its fiscal instruction.

In a report, which was declassified by the Senain, it explains how the agents were prepared for the Counterintelligence of the event in Medellín. In the part of the logistics it is indicated that the coordinator of Counterintelligence, which at that time was Ivan Jarrin, had to “stimulate” the three agents “the feelings of duty and patriotism with the Ecuadorian State in order to preserve the discipline of the personnel”.

In addition, the report states that Jarrín had to maintain contact with the supervisor of the operation via telephone. For that, the official document details the telephone numbers that the three uniformed officers had.

The ex-legislator also says that it should be clarified if the two operations were ordered by the former secretary of the Senain, Pablo Romero Quezada. This occurs because the signature of the former official, who currently lives in Spain, is included in the Counterintelligence operation report. But Romero also endorsed the operation of the Intelligence team, according to Chicaiza. Last June he said he received express provisions from Romero to go to Colombia.

The affirmation of the now ex agent of the Senain has been refuted by Stalyn Oviedo, lawyer of the former Secretary of Intelligence. The jurist has denied that Romero has ordered the transfer of Chicaiza. What he does accept that he ordered was that of Counterintelligence and he said that it was a legal operation and “that he was on track to bring Fernando Balda under extradition.”

Oviedo even states that the president of the Republic, Rafael Correa, was aware of this operation. But the lawyer of the former president, Caupolicán Ochoa, has denied those assertions and even, this Tuesday, July 17, 2018, in a press conference, he said that he expects the judge in the case to declare the dismissal of the case due to lack of evidence against former head of state, based in Belgium.

Another of Balda’s demands is for the Prosecutor’s Office to clarify whether agent Chicaiza knew about the Counterintelligence team that traveled to the Medellín meeting. Diego Chimbo, lawyer of the former Senain, said on Tuesday that his client did not know that Counterintelligence was also in Colombia.

“If I had known him, we would have said so in our cooperation with the Office of the Prosecutor,” he said.

For Balda’s lawyers, these facts should be investigated thoroughly, because after two months of the meeting in Medellín, which was attended by the intelligence and counterintelligence teams, the ex-legislator was kidnapped by unknown persons in Bogotá.

Now, with the closing of the fiscal instruction, the parties to the proceedings should expect the Prosecutor’s Office to request a date from the National Court of Justice for the trial preparatory hearing.

In that diligence, the prosecutor of the case, Ximena Mena, must issue an opinion in which she will indicate whether or not she accuses the defendants of this case. Among them, former President Correa, former Secretary of Intelligence Romero and the former Chicaiza Intelligence.

In April, the Office of the Prosecutor initiated the investigation into the kidnapping of Fernando Balda. Since then the versions of more than 90 people have been taken. Among them are former officials of the Intelligence Secretariat, the Presidency, the Judicial Council and the Prosecutor’s Office. (I)

Cueva proves that without custodians Correa is a gentle pigeon