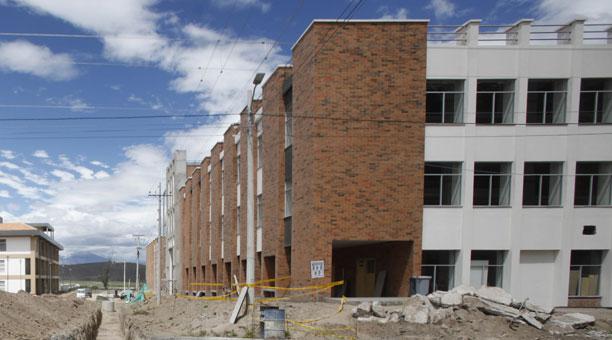 The construction of the Senescyt building on the Yachay campus was carried out by special regime directly, without supporting its convenience and technical and economic viability. The auditors of the Comptroller’s Office came to this conclusion in their report DNA2-0018-2018, which was approved last Friday, April 6, 2018.

This 13,000 m² building with a capacity for 1,000 people is the most advanced in its construction: 95%. The building will be delivered entirely to the Yachay Tech University. Currently, one wing of this structure is already used by 500 students, for whom 13 classrooms were enabled, explained Jorge Martínez, current manager of Yachay EP. The control entity reveals in its report that the construction project was planned through public tender, in the third quarter of 2014.

However, the ex assistant sub-contractor of Yachay EP authorized the contracting under a special regime, that is, without competition and aimed at public enterprises. This change was made without including in the Annual Contracting Plan (PAC). Following this amendment, it was decided to invite the Chinese state company Road and Bridge Corporation CRBC Ecuador, which presented an offer as a consortium with the private firm Sevilla Martínez Ingenieros (Semaica).

The members of the technical committee, formed for this process, qualified it with 92.75 points and seven days later it was awarded the contract for USD 10 million. The Comptroller’s Office states in its report that the general managers, subrogated, legal, violated the articles 4 and 99 of the Public Procurement Law for not establishing the convenience and technical and economic viability of this type of contract.

After the results conference, the ex-sub-delegate Fernando Cornejo and legal representative Gabriela Díaz presented their points of view; but according to the control body, they are not related to this and did not justify the fact. The exgerente general, Hector Rodriguez, described as “idle” and “malicious” the intention of the Comptroller in saying that there was an affectation to the entity by this decision. Ensures that the analysis of convenience and technical and economic feasibility was met before the approval of the bidding documents. For him, this conclusion of the control entity “is not based on a technical analysis of opportunity cost or cost benefit with mirror prices”.

On the other hand, Jorge Martínez ruled out that this building has structural problems and reported that it has the necessary basic services. “You have to get him out of the group of bad buildings”, that is, of the five whose construction is stopped more than a year by deflections and cracks in beams, slabs and stairs. This caused a loss to the company Yachay EP of 31.4 million and motivated the Comptroller to send a report with indications of criminal responsibility to the Office of the Prosecutor, so that an investigation could be initiated.

However, he noted that the Senescyt building is also stopped and to take back a complementary contract with the company of USD 1.5 million is required. “There is already the budget allocation, but we are waiting for the endorsement of the Ministry of Finance.” It is expected that the monetary transfer will be completed in a few weeks, and in 90 days construction will be completed. Martinez also explained that this work has had problems related to budget formalities. The previous administration did not present budget certifications, which are necessary in case of changes in work or new items.

These findings are part of the third report that the Comptroller’s Office has issued, out of a total of 14 that it carries out. Of this amount, 10 are related to the previous administration of the company and the remaining four have to do with the university of the same name. Currently, it is analyzed if glosses and fines can be predetermined. (I)