Seven road connectivity projects will be promoted by the Unasur 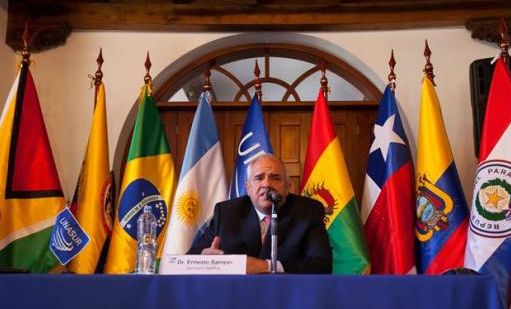 The Secretary General of the body, the Colombian Ernesto Samper, reported on Monday that the Union of South American Nations (Unasur) promotes the development of seven road and river connectivityprojects between its 12 member countries.

“All these projects touch the 12 countries of Unasur, that is why we give special consideration,” said Samper during a press conference after the summit meeting last Thursday and Friday in Ecuador.

Of 30 infrastructure projects delineated by the bloc, seven are considered priority as a Caracas-Bogotá corridor, an access to the Amazon River, a railway line between Paranagua (Brazil) and Antofagasta (Chile), and the improvement of the navigability of the La Plata river basins.

The seven plans will require between 12,000 million and 14,000 million dollars, according to Samper.

“There is about them a clear mandate from the presidents to consider them as a regional priority,” said the Secretary of UNASUR, adding that the aim of the project is “to really create a network of modern infrastructure that gives competitive conditions” to the region.