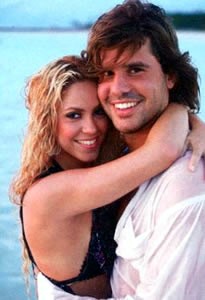 Shakira and her Argentinean boyfriend, Antonio de la Rua, have decided to go separate ways after 11 years together.

People close to the couple confirmed, “At the moment, it is a temporary separation. Both want to take some time to reflect,” sources said. The Colombian singer said in 2006 to the media that she wanted to have a child with her boyfriend—who also works as her representative—”in a couple of years.”

There had already been rumors about the couple having troubles for several months, Shakira always denied any news related. In December, there were rumors that linked Barcelona player Gerard Pique—who appears in the Waka Waka music video—to the singer, she denied the affair “This is  a Waka-rumor don’t take the Waka-rumors seriously,” said Shakira.
The singer has been spending a lot of time in Spain and she recently bought a house in Barcelona.

The couple will publish a statement announcing their separation in a couple of hours.