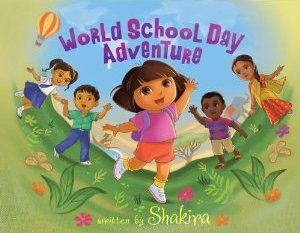 Shakira introduced on Wednesday a children’s book called “Dora the Explorer: World School Day Adventure”, where the Colombian singer worked as a writer.

“Dora is an inspiration to all children in the world, even for me. Working with Nickelodeon to write this story was an honor for me because education is a cause close to my heart,” said Shakira, according to a press release from Grupo Editorial Norma.

The story tells the adventures in which Dora and her friend Boots go on to provide supplies and other materials to schools.

The singer of “loca,” also said that she wants “children from all over the world to know that through knowledge and education, everyone can have great adventures.”

According to Norma, the publisher of the story, Shakira is not only the author but also a character form the story. The production of the book was done in partnership with Nickelodeon for the tenth anniversary of the “Dora the Explorer” series.

“Working with Shakira to create an educational and enriching story has been an extraordinary experience,” said Paula Allen, from Nickelodeon Consumer Products (NCP).

The book will be distributed only in Colombia at the beginning and a percentage of the profits will be donated to Shakira’s Pies Descalzos Foundation, a nonprofit organization dedicated to supporting kids’ education, the intention is to benefit the poorest children in Colombia.

In addition to her recent debut in children’s literature, Shakira is leading in Billboard’s Latin Top. She is at the first place with “The sun comes out,”  for the seventh consecutive week.

EcuRed: The world, according to a Cuban encyclopedia