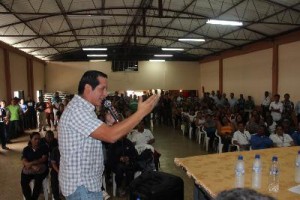 Several associations of workers and profesionales met yesterday to analyze the national political situation. The appointment was in the seat of Somec in Guayaquil and was performed by the Organization Manuelita Sáenz.

Participants included delegations of the Electric Company of Guayaquil, college students and professionals of health.

Carlota Tenesaca, from the front of workers, employees and professionals of the Electric Company, opened the speech highlighting the government’s progress, and the work of the community from the state.

Then,  Rommel Salazar, Director of the youth group, said that the social bases support the presidential reelection of Rafael Correa and requested that the amendment be treated by the Assembly in an agile way, while over 250 delegates shouted “reelection.”

Among the authorities, was the Guayas Assemblyman , Guadalupe Salazar