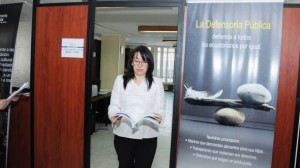 Solanda Goyes, one of the contestants in the selection process of the new members of the National Electoral Council (CNE for its Spanish acronym), submitted on February 4 a new protective action against that entity and the Council for Citizen Participation (Cpccs), which performed the competition.

This is because, after the resignation of Gloria Toapanta to her charge in the CNE Ana Marcela Paredes was appointed, who was elected as alternate in the previous contest. Goyes argues that she should have been assigned to that position, because she had the best scores in the final competition.

Goyes submitted the writings in the drawings room. The action was assigned to Judge Mercy López Martínez, of the Unit of Violence against Women and the Family. “Despite having the best score, I ranked as the fourth alternate and not like the first. The CNE and the Cppcs disrespected the rules,” said Goyes about her position.