The South Koreans will test the banana flour produced in a Quito factory in the coming weeks. A first shipment of this product left this week from the Incremar facilities to be exported. 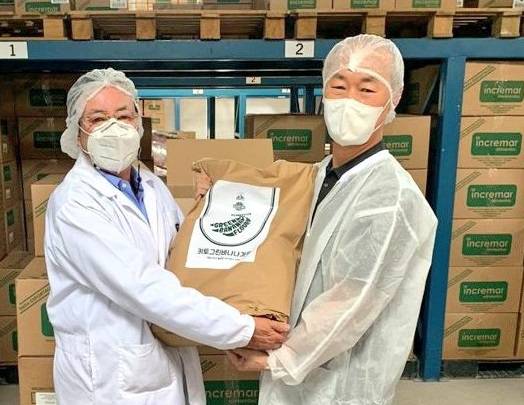 This company made its first sale through a distributor who will be in charge of placing the product in different channels. This delivery marks its foray into the export of banana flour.

A South Korean delegation was in the capital this week to tour the plant and witness the shipment of half a container of banana flour.

Proecuador indicated that it is the first food company in the TASK program to export to this market. This binational cooperation program between Ecuador and South Korea provides advice and technological solutions, in order to internationalize the agro-industrial offer of a group of local companies.

Santiago Martínez, manager of Incremar, said that once they have opened exports of banana flour in the South Korean market, they expect that not only will orders for this product increase, but also for the rest of their portfolio based on the concept of superfoods made with products. of added value.

Incremar, which directly employs 80 people, works with laundry lines, instant drinks, soups, energy bars and flours. Quinoa, lupine, and banana are the raw materials with which it works.

“From what we have talked with South Korean specialists, once you enter that market it may be easier to enter with other products,” said Martínez.

In Ecuador, banana flour is sold under their own brands, but the export was carried out under the brand of the South Korean client.

El Milking made its second milk export to the Peruvian market

Martínez affirmed that banana flour is a product that is gaining importance globally due to its different uses and as a replacement for traditional flour.

Incremar works with banana producers in the El Carmen area, in Manabí, to obtain a quality raw material.

To prepare for the export of this product, Martínez said that they had to make some adjustments that required investments of around $ 50,000.

The Ecuadorian company has a 3,600 m2 production plant and 5 warehouses in its production area, which allow it to have an installed capacity to process 600 tons.

Another company that this month has had the opportunity to export to South Korea for the first time is Latiali. This firm sent cocoa produced on the Camino Verde farm. The negotiation took place thanks to the support of Proecuador and its commercial office in Seoul. (I)