State of siege in San Lorenzo after the attack 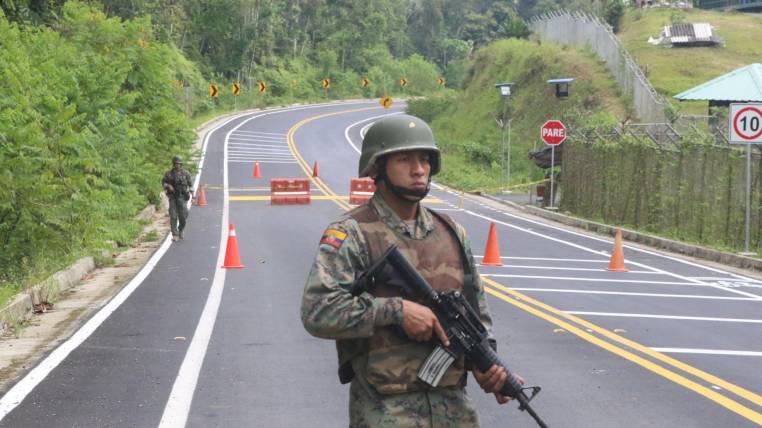 Mataje, one of the 24 parishes of the San Lorenzo canton, Esmeraldas, is practically isolated since Tuesday. Only its inhabitants, who appear in a registry, can enter after a strict control of a group of uniformed personnel belonging to the detachment of Marine Infantry stationed in that place. The control post is located two kilometers from the town center and 12 kilometers from San Lorenzo.

They installed a post with obstacles in the middle of the road to prevent the entry of strangers. Your concern is not free. A kilometer and a half from there, three of his comrades died on Tuesday as a result of the attack of criminal groups linked to drug trafficking. It was the first three members of a patrol that traveled on foot making a last sweep for a bomb alert received the previous day, according to information provided to EXPRESO.

The damage was caused by a device that would have been placed on the ground about two days before, near the military unit and on the Mataje line.

In that town there are about a hundred families, of which at least five are Colombian. In the town there is fear and concern, but “everything is quiet,” said a man of about 35 years who at 3:30 pm yesterday left for San Lorenzo to make a bank transaction. That explained to the military and crossed control. The citizen, who preferred not to identify himself, told this newspaper that there is no greater police or military presence in the town. His aspiration is that the situation be normalized to resume his activities. He was one of the few who agreed to talk with journalists.

Those who were not very successful in crossing control were two members of the security of an African palm plantation. The uniformed ones asked that they extinguish the motor of the vehicle green off-road and that they explain their destiny. Then they were told they could not pass. They turned around and left the place.

All those who approach Mataje are registered and the identification documents are photographed. Yesterday, while an EXPRESO team was carrying out this process, Supertango planes flew over the airspace carrying out reconnaissance tasks.

The control was reinforced after the attack on Tuesday, but it is not something recent. Before that day, the night traffic had already been restricted by the attack that destroyed the police station in San Lorenzo, which caused material damage and injured people, at the end of January.

In San Lorenzo, the inhabitants also prefer to remain silent in the face of fear of possible reprisals from irregular groups. The military is prohibited from giving statements and direct their superiors to do so.

Those who speak ask not to be identified. One of them, who lives near the Naval Infantry Brigade, told EXPRESO that there is concern about the presence of special police groups in the center of the city. He refers to the commands of the Intervention and Rescue Group (GIR) and the Special Operations Group (GOE) housed in hotels near the port and in the center. “It’s dangerous because the target is police and military,” he lamented. Only yesterday, 250 more arrived.

Precisely in the place where the troops of the GOE were installed yesterday a bomb alert was received, similar to the one that preceded the explosion recorded on Tuesday with the military patrol. Until the closing of this edition it was not known if the alert was real or not.

After each attack, the villagers try to return to their routine. That happened yesterday, but with extreme security measures. Agents of the GIR verified with their trained dogs the public dependencies, as for example the building of the Municipality of San Lorenzo.

The presence of the police does not call the attention of the locals as they carry out their daily activities, opening commercial premises or traveling to the Port of San Lorenzo. “We are scared, this had not happened before,” said a woman in her 60s who prefers not to reveal her name. She has a place that distributes water and beer. Because of the state of emergency, which prevails since January 27 when the first attack took place in a police station in San Lorenzo, beer is only sold if it is carried to the other side of the Mataje river, she says.

The military controls also increased in the accesses to San Lorenzo and in the urban area, although the residents feel that it is not enough.

Police commander Ramiro Mantilla, who arrived yesterday afternoon, explained that the use of drones will be implemented to monitor the area. Fausto Olivo, chief of Criminalistics, confirmed that the attack on Tuesday was caused by a homemade device that would have included the use of fertilizer and nails. For today announced the presence in Esmeraldas of the Vice President Maria Alejandra Vicuña, as well as the Ministers of Interior and Defense. (I)