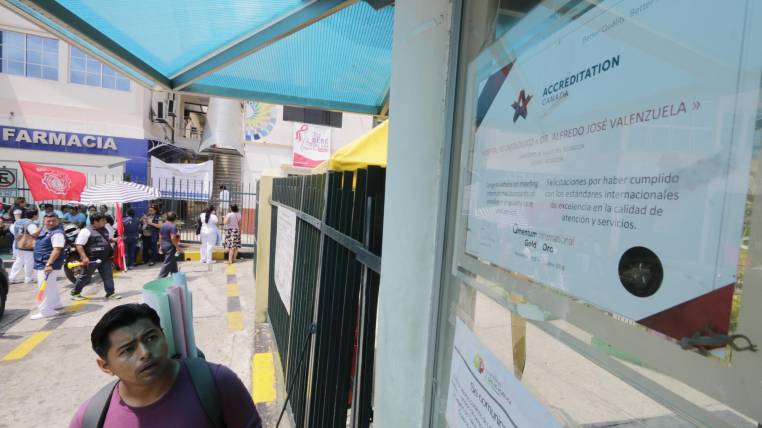 More than 50% of cases of HIV and tuberculosis are treated in Guayaquil. Experts analyze the figures of why urgent solutions are needed

Almost a quarter of the inhabitants of the country have Guayaquil as their daily center of activities (adding the floating population to its 2.6 million residents). This means that not only its economic movement is important, but also the figures that concentrate on health. In the most recent registers in Guayas (2016) there are more than 150 hospital establishments, but of these, the majority (more than 120) are private.

This week, specialists consulted by EXPRESO have alluded to the weight that Guayaquil has in health matters to raise the voices about the urgency of finding solutions to the situation that exists: unpaid historic hospitals (for more than $ 250 million), a pulmonological hospital closed and continuous complaints about the problems of attention, in addition to the long wait for medical appointments in public centers.

The Permanent Forum of Health gives other figures to show why the city can not be left unattended: the diseases associated with the Human Immunodeficiency Virus (HIV) for Guayas exceed 52% of all cases detected in the country. In addition, tuberculosis reports more than 53% of the total and MDR tuberculosis (resistant multidrug) for Guayas borders 84% of national statistics.

The epidemiological part is of vital attention for the city. Mario Paredes, epidemiologist, teacher and tropicalist doctor, remembers that being a Main Port it is much easier to enter contagious diseases. “The dengue and the cholera entered by the coast, exactly by the south and they settled first in Guayaquil and of there basically they were distributed to country level”.

For Ernestro Carrasco, president of the College of Physicians of Guayas, and Luis Triviño, epidemiologist, the administrative decision to eliminate the National Service of Control of Diseases Transmitted by Vectors has influenced this point.

“Everything is now centralized in Quito,” they agree. The fight against these pathologies is affected by the scarcity of resources and the insufficiency of epidemiologists in the health districts. The creation of a research center on tropical affectations, says César Narváez, an infectious disease specialist at the Luis Vernaza Hospital, would help define priorities for preventive action and create strategies to mitigate the problem.

And there is more. In Ecuador, those hospitalized in a year correspond to 9.6% of the inhabitants of Guayaquil, says María Emilia Arteaga, a geneticist who carried out an analysis for the Yublod digital magazine. “Not all the people that make up the percentages necessarily come from the place where they are served. Due to better access to second and third level hospitals that exist in large cities, many choose to move to receive care. ” Here the permanence is of 6 to 8 days, when the average in the rest of cities is of 4.

Fernando Aguirre, former president of the Ecuadorian Society of Cardiology and doctor who led a study on infant metabolic syndrome, says that the delays in payments that often occur with private clinics mean that many of these centers do not attend general consultations or emergencies, unless it is something catastrophic.

For Carrasco, the Mariana de Jesús motherhood, which cared for high-risk deliveries and caesarean sections, today focuses only on natural births, exacerbating the problem. “Now the University Hospital serves as a gynecological center for children. And while there are no figures on the impact this has caused, patients complain that there are no equipment there, nor enough thermocunas, which could aggravate the situation. ”

For experts, patients with diabetes, in addition to those suffering from catastrophic illnesses, are left to their own devices. “They have no level of resolution, nor specialists with the adequate preparation to treat them …”. José Pedro Barberán, dean of the Faculty of Medicine of the Espíritu Santo University, regrets the shortage of medicines and the type of generics they receive. “I am not against them, but since we do not have a Hygiene Institute, in public centers there are drugs that are offered and do not contain the weight that their labels say”. Something serious, he clarifies, which shows that the patient is not treating himself as he should.

15 days ago, EXPRESO requested an interview with the Minister of Health, Verónica Espinosa, to discuss the issue. However, until the closing of this edition there was no response.

Diabetes, hypertension and cerebrovascular diseases cause the death of 42 Ecuadorians every day, according to INEC data.

The lack of prevention causes diseases to increase, which means high costs. For example, the stay in the Intensive Care Unit costs around $ 2,500 per day.

The family association against drugs complains about the treatment their children receive in the public centers of zone 8. They say they only receive vitamins, paracetamol, talks, and bad treatment. (I)