Since the confirmation of the first case of covid-19 in Ecuador, protocols have been developed for spaces where groups of children and adults spend several hours of the day. In the country and in the world , in educational establishments and companies it is sought to confront this type of coronavirus with similar strategies: hygiene measures. 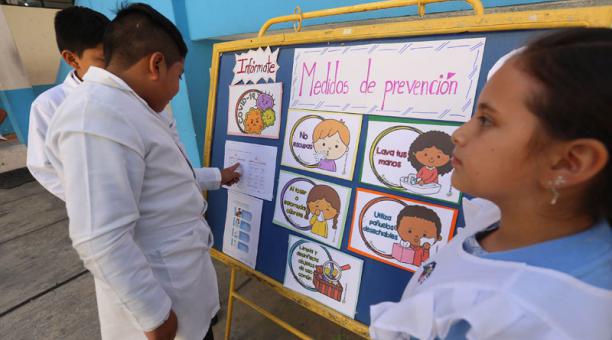 The guidelines to prevent the spread of the virus, which exceeds 92,722 cases in around 80 countries, depend on the number of affected.
For example, in the United Kingdom and the United States where those infected do not exceed 100, the closure of schools has not been arranged . Some centers have suspended classes, but temporarily, to perform a ‘deep cleaning’, after the return of students who went for a walk to Italy.

In the Centers for Disease Control and Prevention (CDC) in the United States, employees have been advised to advance work from home, if they have a fever or signs of respiratory problems. In Spain, telecommuting is also another option promoted by companies.

In Quito, companies and schools also take action . On Tuesday 3, Professor Adriana Correa addressed her students at the Numa Pompilio Llona Fiscal School . When asked about the new virus , children aged 10 and 11 responded: “It is a disease that started in China and is coming to Latin America,” “it is contagious ,” “in Ecuador it was confirmed that a lady, who came from Spain, she is sick”.

On campus, before school and after recess, children are trained at the classroom door and their teacher puts antibacterial gel on their hands.
Since the emergence of the virus in China, hygiene habits such as handwashing and the right way to cover yourself when sneezing are promoted here, through talks and informational material in courtyards and hallways.

But after learning about seven positive cases in Ecuador, there is greater concern.

At recess, three students wore masks. The doctor Mireya Navarrete said they do it despite not presenting respiratory symptoms. “My mom told me to use it,” they respond.

In the Letort Private School they send communications to parents with official information and advice to avoid panic. Among students encourage prevention .

Risk management committees should coordinate the provision of hygiene supplies such as soap, water and gel, which should not be requested from students. Until yesterday they did not reach all the tax offices. In several individuals, it was requested that everyone take their kit: liquid soap, paper towels and gel.

The Ministry of Education has a protocol for institutions, prepared by the Emergency Commission.

The guidelines will be sent until Wednesday, March 4 to educational institutions , confirmed Minister Monserrat Creamer.

The head of Education said that the protocol handles three scenarios. In the first, if the boy has symptoms on the campus, it is checked if they correspond to covid-19 and 171 and the representatives are called .

In the second scenario, the parents communicate about symptoms while the boy is at home. They should inform the unit and seek attention.

And a third, for students arriving from countries at high risk of contagion or who have relatives from those sites. In that case they should not attend the establishments for at least 15 days .

In China, this coronavirus caused more than 280 million schoolchildren to study online. Parents also had a long period of work from home. Although not in all cases.

In Ecuador, according to the Ministry , after reviewing the boy’s health he will be given pedagogical support with digital tools. Now they are updating the system by grade and subject , so that they have study supplies at home. In October, during the strike, the children of the public system were asked to use that option . And in private, platforms.

Juan José Romero, an infectologist at Vozandes Hospital , points out that the epidemic has been shown to have a low impact on children, since there are no deaths and symptoms have occurred in 1% of them.

But, he says, children could be a reservoir of the virus. That is, they may not show symptoms but they can spread. That is why it is important to insist with them on hand hygiene and not going to sick classes. In the works he asks to promote respiratory etiquette and other ways of greeting.

Liquid soap is recommended more than bar soap . In the latter the bacteria adhere more easily.

Paper towels are useful for drying your hands; Avoid cloth ones, moisture is a fungus niche.

Chlorine and also hydrogen peroxide help eliminate microorganisms from surfaces such as desks.

The mask should be worn by someone who has a respiratory involvement, not by all people.

Sharing food and drinks is a risk. The other person may be sick and transmit the disease.

Using a paper towel to touch the door handle avoids contamination again, after washing your hands.

See a doctor if you have symptoms of respiratory conditions, do not self-medicate and isolate yourself, rest at home.

“In case a guest has mild symptoms of coronavirus, they should quarantine in the same hotel”