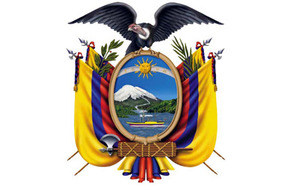 Students from different schools in the city of Guyaquil paid tribute today to the National Emblem, patriotic symbol that was adopted 113 years ago, during the Government of General Eloy Alfaro Delgado.

Inside the  oval is the  Chimborazo volcano, and from its snow, spring waters flow to form  the Guayas River, a symbol of unity between the coast and the highland regions.

The four national pavilions are located around the oval, among them emerge the olive and laurel, and at the top the wings of the condor are displayed as a symbol of the homeland that progresses.

At the Politecnico  school (Copol), the students recalled its historical evolution  at 07:00 during the  civic moment  with a description and symbolism of the logo.

It was pointed out  that October 31 is the day of the National Coat of Arms and public and private institutions of the country honour it as a patriotic symbol that represents the nationality.

“We must highlight what is ours and put aside pagan festivities,” said Ariana Velasquez, Copol college student, referring to the celebration of Halloween that in other years wanted to replace the national civic date.

Also, in the Guayaquil Superior Technical Institute, students will honour the patriotic symbol through a brief summary of its history.

Education authorities gave the provision that the shield must be exalted in educational establishments  to avoid the Halloween celebration, which was met throughout the day with a civic morning, solemn events and cultural and educational events in  schools and civic organizations.

Correa signs cooperation pact with Belarus, travels to France and will speak with Unesco