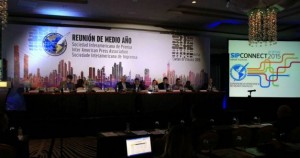 The Superintendency of Information and Communication (SuperCom) noted that the opinions of the Inter American Press about the alleged harassment that would exist in Ecuador toward reporters would be an interference.

“This Superintendence does not pursue, democratizes, pluralizes and gives voice to the people,” the entity said in a statement criticizing the IAPA concerned about the penalty at 37 media but, as indicated, “says nothing about the 113 citizens who have come to this body with its claims, noting that their rights of information and communication were violated “.

According to the SuperCom, the statements of the SIP “does not represent the interests of millions of Ecuadorians that in a democratic act voted YES for the creation of a law regulating the media”.

The SIP said yesterday that “The climate of discomfort (…) has its maximum expression in the weekly adress of President Rafael Correa. In the segments ‘La libertad de expresión ¡ya es de todos!’, ‘La cantinflada de la semana’, ‘La amargura de la semana’ o ‘La caretucada de la semana’ is normal to hear the president to use epithets like “perverse”, “ineffable”, “bitter”, “dishonest”, “poisoned” to disqualify a media or a journalist “