Supercom fined Mauricio Rodas by a case of censorship 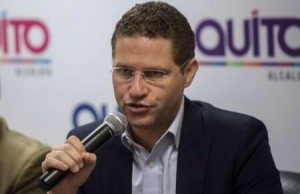 The Superintendency of Information and Communication Supercom incriminated the Mayor of Quito, Mauricio Rodas, in a case of censorship and fined him with 10 unified basic wage, ie, $ 3,400.

According to Supercom, the Mayor, as the highest authority of the Municipality of Quito, was established as responsable of “derogating from the maneuverability the prohibition of censorship established by Section 18 of the Communications Law,” after the Department of Communication of the entity, by an administrative error, suspended the broadcast of the talk show ‘The power of the word’ of the news website Ecuadorinmediato, in municipal radios Distrito 102.9 FM radios and Municipal 720 AM.

The complaint was submitted by the Ecuadorinmediato manager, Francisco Herrera Arauz, and citizen Kléber Quintana. The first argued censorship, while the latter said that their rights of freedom of information were violated.