The Supervisory Committee concluded that during the government of the former president, Rafael Correa, a highly sophisticated public-private corruption system would have been set up and institutionalized, which allowed Alianza PAÍS to receive illegal contributions from state contractors in exchange for awarding contracts.

Nine legislators came to that conclusion that approved the report and that will become known to the plenary of the Assembly and that also suggests submitting the document with its annexes to the Prosecutor’s Office, Comptroller’s office as contributions to the investigations carried out in the bribes case 2012-2016 .

But he also recommended sending the report to the National Electoral Council (CNE), the Comptroller’s Office, the State Attorney General’s Office, the UAFE and the SRI, in order to investigate the financial management of all political parties and movements in the elections from 2012 to 2019.

The commission since last June 18 analyzed the publications on the digital portals “La Fuente” and “Mil Hoja”, on bribes and contributions to electoral campaigns from 2012 to 2016, and on the supposed use of public resources to finance electoral campaigns. 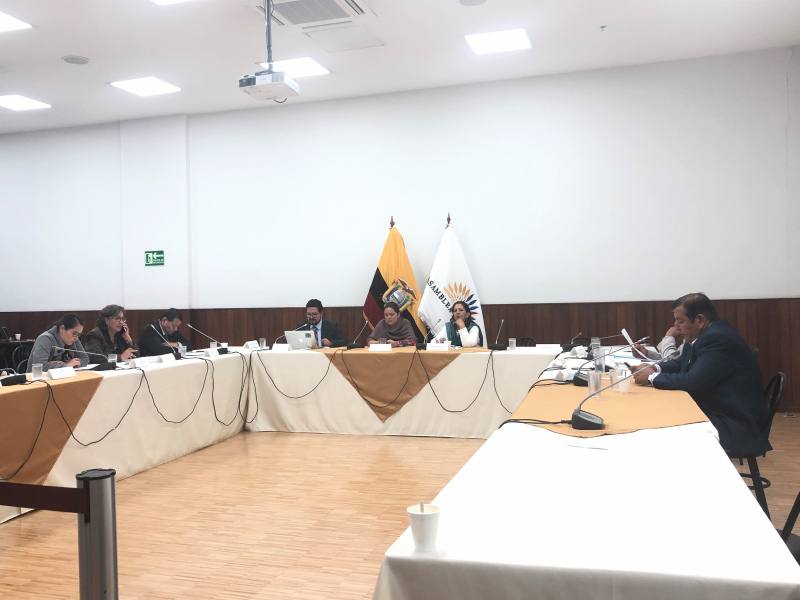 In the approved report, on the last day of the deadline, he maintains that the illegal collection system would have operated in parallel with the formal one of the PAIS Movement, in order to finance specific electoral campaigns, as well as other items outside the organization’s own politics.

In addition, the legislators deduced that from the analysis of the appearance of the president of the CNE, Diana Atamait, and from the information provided by that institution, it can be determined that the PAIS movement that in the accounting of the campaign accounts would not have registered all the income and expenses; irregularities that were not detected by the current inspection mechanisms, specifically by the National Directorate of Control and Electoral Expenditure Control of the CNE.

Among the possible indications of irregularities, contributors have been identified, whose income statements are zero or that are not registered in the SRI; that is, the amount of your contributions is not compatible with your income tax return; In addition, if similar products and services reported by the different campaigns are compared, significant variations in their costs are observed, which could be due to overpricing or irregular invoicing of suppliers.

In addition to the appearance of the national director of the Internal Revenue Service (SRI), Marisol Andrade, it is concluded that there are contributions from citizens to the PAIS Movement that does not report income or income tax payments; that, a bank of phantom companies would be identified through which, contractors with the State would have made their illegal contributions viable.

The report concludes that from the appearance of the journalist, Luis Eduardo Vivanco, in the case of the Odebrecht company, there would be indications that not only would it have proceeded to finance political organizations, but also to pay bribes to obtain contracts with the Central Government and with Decentralized Governments; Therefore, the Office of the Prosecutor and the Comptroller, within the framework of their powers, should proceed to restart or initiate the respective investigations.

That from the appearance of the Comptroller General, Pablo Celi, it follows that it is necessary that the National Assembly expand the powers of the Comptroller, through the corresponding legal reform, in order to have mechanisms of financial control of political organizations and that the processes of information exchange and cooperation between the control entities be improved: Prosecutor’s Office, UAFE, CNE, SRI, National Assembly, among others.

The Supervisory Committee noted that the legal representatives of the private companies mentioned in the reports, the majority presented excuses in the sense that they are already being part of an investigation process carried out by the Prosecutor’s Office and / or that they are not subject to control politician by the National Assembly.

Another point observed by the Supervisory Committee is that there is an institutional weakness of the CNE to exercise its competence to control income and electoral expenditure, so it is intuited that the indications of possible financing with illegal contributions to the Country Movement would not be an exclusive infraction in which the mentioned movement would have incurred, but, because it was a structural problem, it could also have contaminated the actions of other political organizations; Hence, it would be necessary to promote a profound reform of the Code of Democracy, strengthen the CNE in its control capacity, create systems that allow the sharing of financial information among all control institutions, and investigate how the other finances have managed their finances. political organizations

Therefore, the Commission recommended that this report and its annexes be sent to the State Attorney General’s Office in order to strengthen the ongoing investigations into the 2012-2016 Bribes case.

That it also be sent to the Comptroller’s Office to contribute to the special examination of the allocation, administration, and use of the Permanent Party Fund and Electoral Promotion Fund for the PAIS Alliance political organization.

Another of the recommendations approved is to send the report to the SRI to investigate the possible tax infringements that the aforementioned private companies and private individuals may have incurred, in the case of Bribes 2012-2016; either through crossing invoices, making illegal contributions, altering their accounting reports, among others.

It is also suggested that the report be sent to the Ministry of Labor for the purpose of investigating the possible prejudices of the employees of the aforementioned private companies, in the case of Bribes 2012-2016, since it is verified that they made illegal contributions (bribes) to officials public, the accounting records of the companies could have been affected, and, therefore, the number of profits generated was reduced.

The commission also made proposals for reforms to the Democracy Code to reform the control and transparency of the financing of political parties and movements, as well as their spending.

Testimonials expose the structures of the electoral campaigns of Alianza PAIS