Testimonials expose the structures of the electoral campaigns of Alianza PAIS

With an “I’m not going to answer any more questions,” Laura Terán, a former assistant of Pamela Martínez, a former advisor to Rafael Correa, ended her early testimony in the ‘Bribes 2012-2016’ case.

It was about 2:00 pm at the National Court of Justice. Carlos Alvear, a lawyer for Alexis Mera, the former secretary of the Presidency of the Rafael Correa regime, wanted to know if he was told that his client met with Martínez.

And the decision reached all the defenders. Although Judge Daniella Camacho explained that lawyers had the right to ask, Terán had already decided not to speak anymore. He previously answered 35 questions from prosecutor Diana Salazar and spoke before for two hours. Their responses reinforced the hypothesis of the Prosecutor’s Office: in the correísmo, a criminal structure was formed to receive contributions. 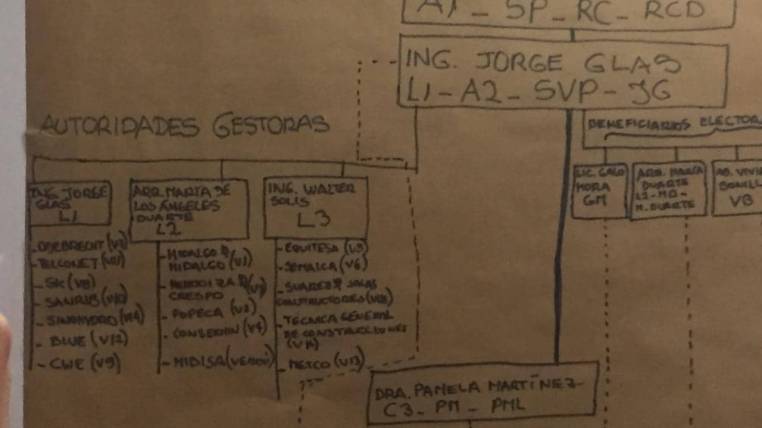 Of medium height, thin build, 42 years and 25 years of career in the public and private sector, Terán claimed that her work efficiency led her to manage the archives of the 2011 election campaigns, the presidential elections of 2012, the sectional elections of 2013.

What information did you handle? In each one, he registered codes that identified the names of authorities and companies that would contribute to the campaigns.

The information should be handled under reservation and always be recorded in ‘flash memory’ that was available to Martinez.

This is how his boss, by order of former President Correa, provides for systematization and a report for both him and former vice president Glas, he said.

On a blackboard located in the right part of the room, it took half an hour to draw up a scheme on a flipchart. Correa was assigned the codes: A1, SP, RC, RCD. To Glas: L1, A2, SVP and JG. He distinguished managing and beneficiary authorities. The latter put electoral beneficiaries and other beneficiaries.

As managers, he cited Glas, María Duarte, and Wálter Solís. Under each name and code were the companies. Managers were those who “had direct contact with the companies that made the contributions through account crossing or in cash.”

He cited as beneficiaries Galo Mora, María Duarte, Viviana Bonilla, and Vinicio Alvarado. In other beneficiaries, Alexis Mera, Doriz Solís and the former secretary of the Senain, Rommy Vallejo.

How was the mechanism? Both for the crossing of invoices and in cash, Martinez’s disposition was received in sealed envelopes. The beneficiaries, through emissaries or messengers, sent to leave or receive the envelopes. For nine Correa employees, there were about thirty messengers and emissaries.

The only one who received cash was Martínez by “disposition of the engineer Jorge Glas and the economist Rafael Correa,” he said. Terán was told four times that the envelopes contained money. He mentioned that he delivered to Christian Viteri, Gustavo Bucaram, Paulina Proaño and Rolando Carrera.

He emphasized that the functions he fulfilled were around “the express provisions of then-President Rafael Correa to Pamela Martínez.” They were made by memos of the office, mails, calls and by handwritten notes by Correa and sent as ‘private, personal and confidential’. He concluded his testimony between sobs and declaring his innocence.