Surinam handed the pro tempore presidency of UNASUR to Uruguay 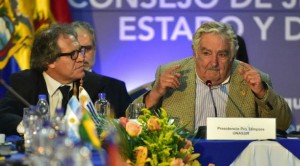 Desi Bouterse, President of Suriname, yestarday gave to the Uruguayan President José Mujica, the Pro tempore Presidency of the Union of South American Nations (Unasur) in the Presidential summit of the group, which is held in Guayaquil.

Mujica will assume that charge until next March 1, when the elected President of Uruguay, Tabaré Vázquez, takes over the presidency of his country.

Mujica gave an emotional speech focused on the need of Latin America to strengthen the regional integration and fight against social inequalities.

“Inequality bites into the bowels of our continent,” said the Uruguayan President, citing that the world’s richest man (referring to the Mexican Carlos Slim) comes from a country that “is torn by the weight of its contradictions.”

“We have to shout loudly in the world ‘no corruption’,” said Mujica, who invited his South Americans colleagues to “build the country that our liberators dreamed of.”

Bouterse, meanwhile, highlighted the progress of the Unasur has achieved in the last year, in which his country held the Pro tempore Presidency. He highlighted the regional support for the peace process in Colombia, the position of Unasur against the “illegal occupation” of the Falkland Islands (disputed between Argentina and the United Kingdom) and the support of the group to Buenos Aires on its debt restructuring. He also highlighted the position of UNASUR against the US blockade of Cuba and the right of Cuba to participate within the Organization of American States (OAS).