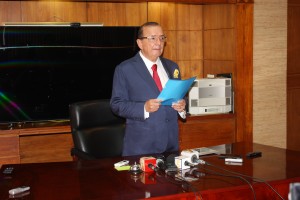 This February 9, approximately at 15h00, Álvaro Noboa, through a press conference, spoke on the publication of a research called ‘Swiss Leaks,’ which involves the Ecuadorian businessman in data about thousands of accounts allegedly hidden in the Swiss bank HSBC.

However, Noboa, 64, assured before this accusation that he keeps his ” business continuously monitored” and “there is any claim nowhere in the world by tax evasion”.

He also said that the Noboa Group, a multinational company that conducts business with bank accounts around the world, “respond for itscompanie´s taxes and obligations to the tax authorities of the country where businesses occur.”

In his speech, the businessman said: “in a personal capacity I have not, nor haven´t had accounts in the HSBC.”

Noboa concluded the press conference reporting that continues to receive worldwide business invitations and informed that one of these was with the Cuban former president Fidel Castro for business matters altogether. “I spoke with him in New York. He invited me and invited a group of entrepreneurs from around the world, at home of a friend of mine, to invest in this country. So do not be surprised that Fidel Castro invited me to invest in his country. Thus invite me to Europe, Asia, the United States businessmen who want to do business with me, “he said while showed a photo of that moment to the media.