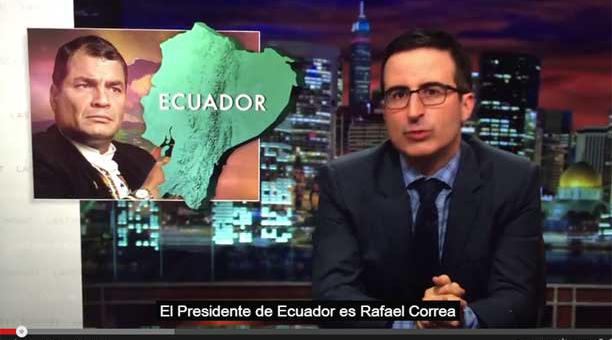 Print Screen of  YouTube from the channel of Mauricio Norona.

The British comedian John Oliver dedicated about four minutes to President Rafael Correa on his show ‘Last Week Tonight,’ aired on Sunday by HBO. With his usual sarcastic style, he critized the modus operandi of the Ecuadorian President.

Oliver refers to the citizen´s links (weekly addresses) of the president and how amazing things can happen in them. “That’s the way a president should talk to the country,” said Oliver about the entering of clown Tiko Tiko on stage. “From now on, every presidential speech should include a clown,” he added.

He also hinted at how the President has broken a newspaper on his addresses and how he might have not noticed that more than one copy is printed.

Oliver even called Correa immature by responding in his broadcasts to social media users who criticize and satirize him, as Crudo Ecuador. Stop ‘ googling you’: you are the President of Ecuador,” he added.

Given this, President Rafael Correa, responded today from his Twitter account:”British comedian teases President Correa” followed by the link of an article published on the issue and after that asks “British comedians have existed? Really?.”

The video is no longer available on the YouTube channel of ‘Last Week Tonight With John Oliver’ and on its website states that it is because of “a copyright claim by Home Box Office Inc.”