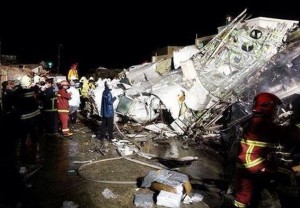 At least 47 people have died and eleven were injured this Wednesday in a plane crash of the company Transasia Airways.

The authorities in the area, according to France Press, explain that 54 passengers plus a 4 people from the crew were traveling aboard the plane.

The incident occurred in the afternoon, Wednesday, when, for unknown reasons, the plane tried to make an emergency landing in the aforementioned airport, according to the Civil Aviation Administration of China.

Furthermore, it departed over an hour late due to bad weather conditions relating to Matmo typhoon.