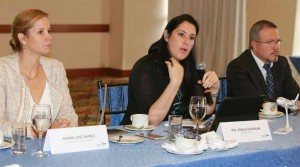 Paola Carvajal, the manager of the public company TAME, presented her resign after six months at the helm of the airline (since September 2015). It was confirmed this Wednesday by sources close to the company.

Carvajal, who was previosly the Minister of Transport and Public Works, recognized few weeks that the company had recorded losses of 58 million dollars in the last two years. But she had also announced a series of measures to lower the operating costs. One was to sell the fourth Embraer aircraft and leave the total fleet with 11 airplanes.

In addition, some routes were eliminated causing losses to the company, such as international Quito – Sao Paulo, Quito-Fort Lauderdale-Quito; or domestic routes as Quito-Tena-Macas, and Coca-Latacunga. The company was willing to seek a strategic partner this year. (I)

Correa says that “these riots are seeking a death”