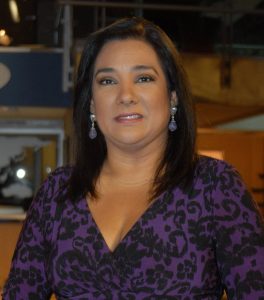 Why the Bolivarian Intelligence Service, SEBIN, sought to Tania Tinoco, Ecuavisa journalist covering the visit of presidential candidate Cynthia Viteri to Venezuela, where her politics and her partisan entourage were expelled? We asked her and it is not clear: “I too am wondering why they were searchinf for me, I made a puzzle and can not find the final tab”.

The journalist dares to speculate that it might be by the program Vision 360 that titled Venezuela, failed state, whose central report was prepared by Hernán Higuera and other journalists, but she appeared as conductive space.

Last Friday must have experienced what she calls a “complicated occupational hazard” when the SEBIN expelled Viteri from the country, but in the ‘operation’ they asked “where is Tania”, holding a photograph of her face. And where was she? The journalist says that in another vehicle, with her colleagues Carlos Sacoto and Tito Mite. They did not reach Ramo Verde jail with the rest of Ecuadorian journalists who were preparing to cover a failed interview bewteen Viteri and Lilian Tintori, the wife of Leopoldo Lopez, who is serving time in that prison.