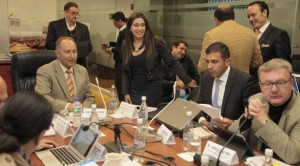 The Draft Law on Production Incentives and Tax Fraud Prevention was sent on Friday to the National Assembly. This, contains 46 articles, a transitional and a final provision. The text also includes in fiscal reforms, about 11 regulations in the country.

Among the reforms is the Law on Internal Taxation. It is intended to change the rule to include an article in the section on deductions. The text states that “could not be deducted expenses promotion and advertising of food and drinking that is harmful to health”.

President Rafael Correa said it was difficult to establish a tax on “junk food”. “We have alternative (…) Advertising costs are costs and affect profits and thereby pay less tax. If I spend 100 on advertising, I receive less profits and pay less taxes (income tax). Junk food, all those fast food chains, saturated in oil, may advertise, but not deductible, “he said.

Pablo Arosemena, President of the Chamber of Commerce of Guayaquil, said the new regulations do not directly affect the pockets of middle class Ecuadorians who consume more food in fast food restaurants; However, he believes that this measure would jeopardize the profitability of companies engaged in advertising and marketing, especially to small and medium firms.