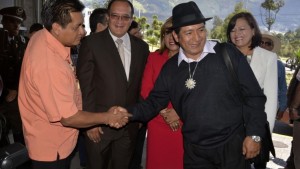 The debts of the central government with the local governments grow. “The works are paralyzed” report the prefects of the North Commonwealth and the Consortium of Autonomous Provincial Governments of the Amazon Region.

Antonio Kubes, prefect of Pastaza and head of the agency, said that the Ministry of Finance owes 48 million to the provincial governments of Napo, Pastaza, Morona Santiago, Sucumbios, Zamora Chinchipe and Orellana. This has led, he said, to the stoppage of projects and suspension of payments.

He acknowledged that recently the january resources have been transferred. These outlays “were used to pay salaries and suppliers,” he added.