Tensions between Venezuela and the US continues 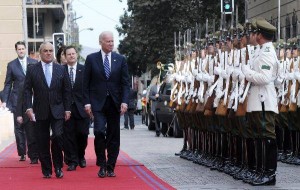 Tensions between Venezuela and the US continues

The United States Vice President Joe Biden, during an interview with the Chilean newspaper El Mercurio accused to Nicolas Maduro, President of Venezuela, of invent conspiracies on the United States to “divert” attention from local problems and described as “alarming” the situation of the South American country after more than one month of student protests that have left 21 dead. He also stressed that “universal rights” must be respected.

The Government of Venezuela rejected the statements, although he stressed that there is “clear desire to revisit and renew relations”.