The construction company used the My Web Day and Drousys softwares to cover up its bribes scheme in 12 countries, including Ecuador. These softwares encrypted communications to evade justice, but at the same time kept detailed payment information. Executives and four alleged intermediaries in the country were identified.
——————————————————————————————————

Odebrecht set up a meticulous bribe plot. The Brazilian company left nothing to chance and ensured the unification of methods and systems used in all countries to hide illegal payments.

Negotiations were in charge of executives from the so-called Department of Structural Operations, a facade of the real accounts.

According to the Brazilian courts, the Structured Operations Department was in charge of five people: Hilberto Silva (coordinator), Luiz Eduardo Soraez (payment manager), Fernando Migliaccio (treasurer and in charge of transfers), Angela Palmeira (international payments), and Maria Lúcia Tabares (responsible for paying bribes in Brazil). Currently, they are prosecuted by that country’s justice system and have revealed how the corruption network operated.

The Operations Department purchased a bank in Antigua and Barbuda (Meinl Bank) to transfer money to offshore companies and banks in each country where the network operated.

The construction company and its executives established 46 front companies around the world. Among them, Constructora Internacional de Sur and Klienfeld, which according to the Prosecutor’s Office, is directly related to the bribes plot in Ecuador. 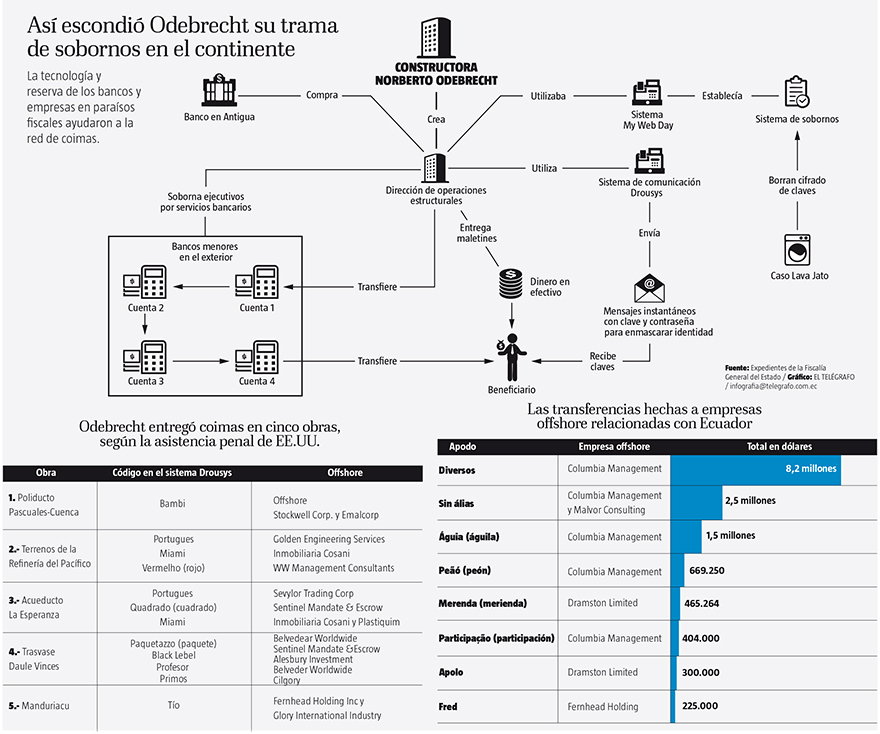 But the protection afforded by those offshore companies in tax havens was not enough. To work in the shadows, Odebrecht executives acquired two complex computer systems: My Web Day and Drousys, which kept a computerized record of the bribes paid by the construction company in Ecuador and 11 other countries in America and Africa.

My Web Day had a dual function: it recorded the bribes paid by country, projects, works, amounts, accounts, transfers and beneficiaries, that were identified by codes, but it also erased the encrypted passwords.

This strategy was complemented by the Sweden based Drousys program, that allowed executives involved to talk secretly with each other and with external financial operators.

This program allowed the executives sending encrypted instant messages. Some were erased immediately, but others were saved. These files helped the Brazilian justice system to discover the names used by the main Odebrecht executives.

The aliases of the heads of the Department of Structured Operations

The “Uncle” code and the other aliases

‘Gigo’y ‘Giginho’ appear in the mails delivered by US justice to the Ecuadorian Prosecutor’s Office. One of them was sent on June 13, 2012, by ‘Tumaine’ (the alias of Angela Palmeira) to ‘Gigo’ and ‘Giginho.’ The treasurer talked about the Manduriacu project: “The outstanding issues are great. Only after the receipt of the extracts, the operation will be derecognized.”

In the next paragraph of the email appears a screenshot showing the alleged payment of $ 150 thousand to build the Manduriacu hydroelectric plant, where the “Uncle” code appears. It also shows that the money came through the offshore company Glory International Industry. For the Prosecutor’s Office, this payment would be related to Ricardo Rivera, uncle of Vice President Jorge Glas and one of the main suspects in the country.

The records of the alleged bribes paid for the awarding of the construction contracts for the Pascuales-Cuenca Oil Pipeline, the works made on the grounds of the Pacific Refinery, La Esperanza aqueduct, and the Daule-Vinces transfer also appear in the Drousys system.

The emails show the amounts, code names and offshore companies used by the intermediaries to transfer money. These traces are key to discover who is hiding behind each alias.

In the case of the Pascuales-Cuenca Oil Pipeline, the International Criminal Assistance reveals that two payments were made to ‘Bambi’ for more than $ 400 thousand and 190 thousand euros in February and March 2014. Offshore companies Stockwell Corporation and Emalcorp transferred these amounts to Bambi according to records from the Drousys system.

Stockwell and Emalcorp are linked to Gustavo M., who confessed that he was an intermediary of Odebrecht to pay bribes to Petroecuador officials. For the Prosecutor´s Office, the relationship is clear. In his indictment, he said that the money came from one of Odebrecht’s largest offshore companies, Klienfeld, to Stockwell and served to get key information for Odebrecht to win the bid. While the other part of the cash was paid by Emalcorp, owned by Kleper V., who also confessed he was an intermediary of the construction company.

In the works for the Pacific Refinery and La Esperanza Aqueduct, three aliases appear: ‘Portugues,’ ‘Miami,’ and ‘Vermelho.’

In February and April 2014 ‘Portugues’ received money through the offshore company Golden Engineering Services. This front company is allegedly linked to Freddy S., a former manager of the Venezuelan state oil company PDVSA in Ecuador and that, according to the indictments, received more than two million dollars from Odebrecht to help the construction company have access to the lands of the refinery.

According to US International Assistance, Freddy S. received the most money totaling $ 2.4 million, delivered through five payments to Golden Engineering Services and Sevylor Trading Corp. He is currently a fugitive.

The Odebrecht Department of Structured Operations detailed the transfers to Columbia Management, allegedly linked to Ricardo Rivera. For example, in the US Justice Report, Columbia Management is the front company that more money from alleged bribes triangulated: more than $ 10 million. This money was paid to several intermediaries identified only by keywords. ‘Diversos’ received $ 8.2 million; ‘Aguia’ received $ 1.5 million; ‘Peao’ received over $ 600,000 and others who did not have an alias and received $ 2.5 million in total.

In addition, Odebrecht’s former director in Ecuador José Conceição Santos confessed to the Ecuadorian Prosecutor´s office and National Court judge Miguel Jurado that money triangulation also went through the accounts of the offshore company of Edgar A., who later was responsible for bringing the cash in the country to bribe public officials and intermediaries.

For the defense of Vice President Jorge Glas, the trial against him has political purposes. Attorney Eduardo Franco is convinced that the judge of the National Court of Justice Miguel Jurado is not impartial and, therefore, he demands his removal.

“A legal aberration and infamy is the imprisonment of Vice President Jorge Glas because he is innocent. There is no evidence,” the lawyer wrote on his Twitter account. (I) 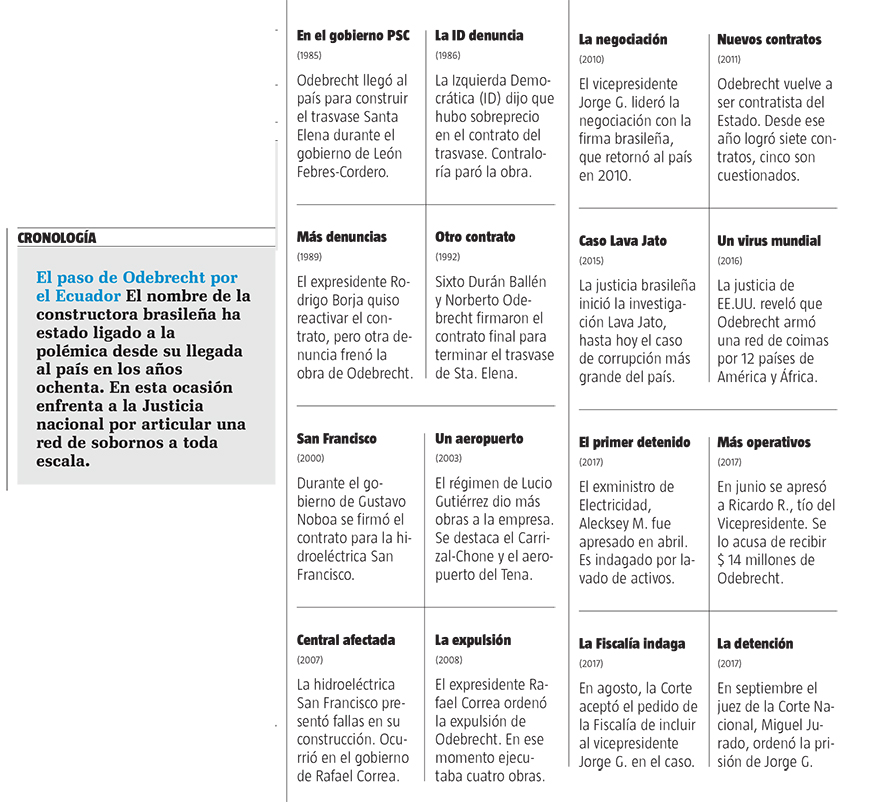