For the first time, the United States Orion P3 plane landed at the San Cristóbal airport in Galapagos. He did it this May 5, 2021. 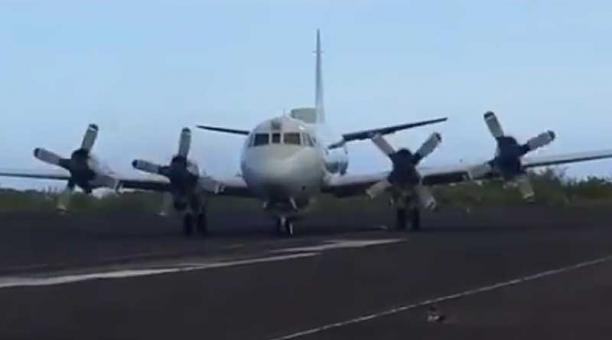 This aircraft carries out air-maritime exploration operations to detect illicit activities such as drug trafficking and illegal fishing.

He arrived in the country in September 2018, but he only supplied himself with fuel at the Guayaquil air base to carry out reconnaissance work. Now, the idea is that it can also load gasoline from the Archipelago.

Today, US Ambassador Michael Fitzpatrick arrived on the aircraft. He was received by the Minister of Defense, Oswaldo Jarrín and the commander of the Navy, Rafael Poveda.

Fitzpatrick indicated that the operations carried out by Orión are carried out with the authorization of Ecuador. “The information that is generated in Orion P-3 has no value for the American government, it only has value in the hands of the Ecuadorian government.”

Jarrín indicated that international cooperation is necessary to confront drug trafficking, “Identification and rapid intervention are needed, since the drug leaves the Ecuadorian coast, under the influence of Colombia.”

The Defense Minister also indicated that there are two drug trafficking corridors around Galapagos. Over there the speedboats advance with the drug to Central and North America.

In 2018, when the Orion began operating, it managed to detect three tons of narcotics destined for the United States and Canada. This ship is equipped with high technology to track such illicit acts.

Álvaro Noboa shakes social networks with his change of ‘look’