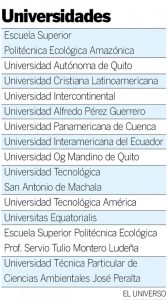 With 78 votes in favor, 16 negatives and six abstentions, the National Assembly approved Tuesday the Extinction bill for 13 universities suspended by the Council for Evaluation, Accreditation and Quality Assurance of Higher Education.
When explaining the suspension process, the Chairman of the Education Commission, Raul Abad (of the Alianza PAIS party), pointed out that the Contingency Plan helped to overcome the situation of twenty thousand university students who continued their studies.

But Ricardo Moncayo (CREO), a member of the same Commission, objected against the closure of the Inter-American University, with 2,300 students, 150 professors, and 50 employees. And Moises Tacle (PSC) argued that the same parameters should have been applied to public universities.

Gaston Gagliardo, a member of that legislative body, said that this law closes a “nefarious chapter of higher education” in the country, indicating that there were six that did not have premises, paid high leases and even offered degrees in cosmetology among the extinct establishments.
The bill will be sent to the Executive branch for approval and forwarded to the Official Registry if it´s not partially or entirely objected.