The control to the funds for campaigns and a new formula for the distribution of seats are the central axes of the reform of the Code of Democracy, in force since 2009, which was approved yesterday by the Assembly, with the change of 160 articles. 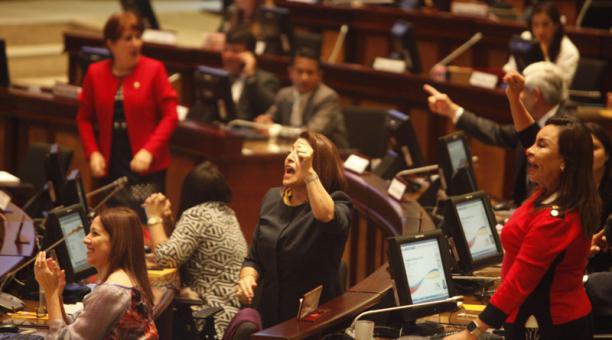 The parliamentary majority resorted to the same formula used in other crucial norms: sensitive issues were voted separately, as happened in October with the reform of the Organic Integral Criminal Code (COIP).

After the Plenary gave its consent, there were three consecutive votes. The changes of greater consensus among the banks – which include control over electoral spending – were voted first. The approval was given with 113 votes from 119 assembly members present.

Only five abstained and one voted against. Sensitive issues came later. One of them was the approval of new guidelines for the application of alternation and gender parity in the lists. In the hemicycle there were hugs and applause among the assembly members, upon obtaining approval with 113 votes.

Only the official Fausto Terán and Ángel Sinmaleza (exSUMA) voted against. Roberto Gómez (I think) and four other parliamentarians abstained. Gender parity will be applied progressively. For the 2021 elections, the minimum percentage on the lists will be 15% (5 more than the current average).

While for the 2023 sectionals it will be 30%. As of the elections of 2025, the goal is 50% and that all presidential binomials be female-male or male-female.

In a third vote the change of the method of allocation of seats, from D’Hondt to Webster, was defined, which was the one that generated the greatest debate among legislators. He obtained 76 votes, six more than those required for approval.

The criteria of the majority of Country Alliance (AP), Creo and two banks of independent assembly members were imposed. The Correism and Christian Social Party (PSC) blocs voted against it, arguing that changing the formula could affect the country’s governance. Ximena Peña (AP), rapporteur of the project and president of the Justice Commission, said that these “are substantive reforms that will balance the field, so that the players in the electoral contest have fair conditions.” Expand Diana Atamaint, president of the CNE, and José Cabrera, counselor of the organization, at a press conference.

The approval was given less than three months before, in February, the National Electoral Council (CNE) convened elections for 2021, to elect assembly members and the new President of the Republic. After the Assembly submits the approved document, the Executive will have 30 days to present their observations and the Parliament another 30 to ratify or pave, in case of a veto.

“The issues have been coordinated with the Executive, so hopefully, in that sense, there will be no major developments,” said the president of the Assembly, César Litardo (AP).

The change in the method of allocation of seats means that minorities have a greater representation, according to Peña. This is used for the designation of seats in the National Assembly, mainly, and in council elections. In practice, it consists in changing the formula from continuous dividers (1, 2, 3) to discontinuous ones (1,3,5) for this process.

The correísta Marcela Aguiñaga believes that Webster’s method will not strengthen political organizations of greater electoral weight. “What will happen – he added – is that there will be a distribution of seats to parties that have very few votes and that at the end of the day we will see if in the next period they will give governance to the country.”

Another of the relevant changes has to do with voting by closed lists, not by candidates for the next elections (see box).

Regarding the control of campaign expenses, a transitional one was included for the implementation of a policy financing control system, which should be ready three years after the reform is published in the Official Gazette.

The CNE, the Internal Revenue Service (SRI), the Comptroller’s Office, the Prosecutor’s Office and other control bodies – within 120 days – must implement a data interconnection system.

In the same period, three urgent audits must be carried out: the electoral registry, the computer system of the CNE and the signature validation system of the agency. After the decision of the Plenary, one of the first to react was the president of the CNE, Diana Atamaint, who faces a request for political judgment by the Creo block.

Atamaint considered that the articles will allow for better control of electoral spending, regulate the party fund and transparent party accounts.

In the reforms there are sanctions against gender-based political violence, and it will be sanctioned by the Contentious Electoral Tribunal (TCE).

Women need to tell their own stories in movies