With 126 votes, Parliament approved the Inter-American Convention against all forms of discrimination and intolerance. In addition, in the first debate, the reform project to the Law of Creation of the Amawtay Wasi Intercultural University was processed. 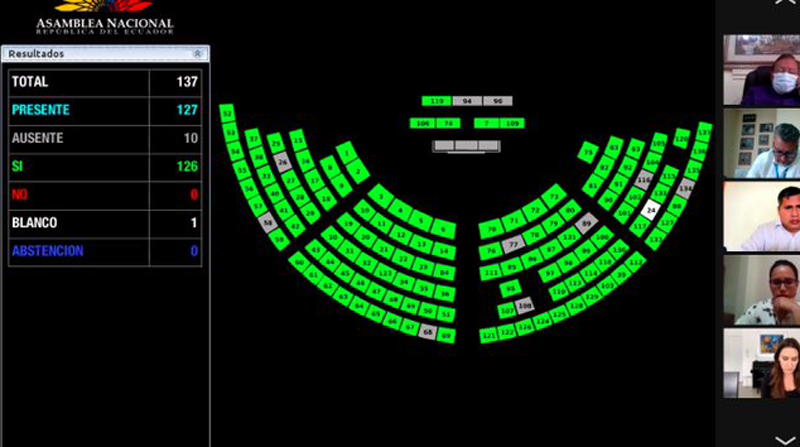 With 126 votes, Parliament approved the Inter-American Convention against all forms of discrimination and intolerance.

Decisions were made this Tuesday, July 13, 2021 in session 717 of the Plenary in blended mode.

Regarding the approval of the Inter-American Convention against all forms of discrimination and intolerance, assembly members such as Nathalie Viteri (PSC) and Paola Cabezas (Unes) agreed that it is an important tool to protect the rights of women, the Glbti population and Afro-Ecuadorians, mainly.

Viteri argued that the States parties to this international instrument undertake to formulate and apply policies that aim at equitable treatment and the generation of equal opportunities for all people.

Cabezas said that cases of discrimination, intolerance and xenophobia persist in the country. “Discrimination and intolerance are latently ingrained, it is not that there are no laws, what has not existed is the collective will,” he said.

The report’s speaker, Juan Fernando Flores (Creo), highlighted that this Convention strengthens the Inter-American System for the Protection of Rights, since it expressly recognizes discriminatory categories related to gender expression and identity, migratory status and research on the human genome, not contained in other international instruments.

In reference to the first debate on the reform project to the Amawtay Wasi Intercultural University Creation Law, the debate focused on extending the deadline for this project until December 2023, since it expired on August 2, 2021.

The president of the Education Commission, Manuel Medina (Pachakutik), acknowledged that all the institutionalization processes of the Amawtay Wasi University have not yet been fulfilled, which in Spanish means the House of Wisdom, as demanded by indigenous organizations.

Pachakutik assembly members such as Salvador Quishpe and Rafael Lucero closed ranks in favor of this project. Quishpe argued that there is a lack of a system for the Quichua language in the country.

However, the correista Pascasio Córdova expressed his disagreement with the fact that they seek to reactivate the “garage universities”, referring to the fact that Amawtay Wasi was part of the list of 12 institutions that were closed due to lack of academic quality in 2012, when it was privately owned.

The president of the Conaie, Leonidas Iza, who was received in general commission by the Plenary, demanded that the resources be guaranteed for the operation of this University. He affirmed that this is key to building an authentic intercultural and plurinational State.

The Education Commission planned to start today with the preparation of the report for the second debate on this project, but the session was canceled at the last minute.

Ecuador will use support from multilateral organizations to reactivate the economy

Victoria Salcedo: “I have many things to do, there is a long life”